Buddhism is a nontheistic religion that encompasses a variety of traditions, beliefs and practices largely based on teachings attributed to Siddhartha Gautama, who is commonly known as the Buddha, meaning "the awakened one".

The concatenation of twelve nidanas as described in Buddhism is as follows:

4- From name and form arise the sense organs and their objects (ṣaḍāyatana).

5- From sense organs and their objects arise contact (sparśa).

The three marks of existence are three characteristics shared by all sentient beings, namely:

1- Impermanence (Pali: anicca, Sanskrit: anitya). All conditioned things are in a constant state of flux. The appearance of a thing ceases as it changes from one form to another.

2- Dissatisfaction or suffering (Pali: dukkha, Sanskrit: duhkha). As all things are impermanent, nothing in the physical world or the mind can bring lasting satisfaction.

3- Non-self (Pali: anattā, Sanskrit: anātman). There is no self as an entity or an essence, but only as an always changing conditioned process. 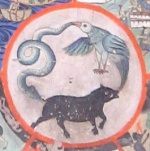 In the Buddhist tradition, there are three poisons or "afflictions" (kleśa) innate in sentient beings. These poisons are the root of craving (taṇhā) and keep beings trapped in samsara. They are:

The three poisons are symbolically drawn at the center of Buddhist Bhavachakra artwork, with rooster, snake and pig, representing desire, aversion, and delusion respectively.

The five hindrances (Sanskrit: पञ्च नीवरण pañca nīvaraṇa) are identified as mental factors that hinder development of wisdom and progress in meditation.

1. kāma-cchanda: sense-desire (desire for the objects of the five senses).

These "poisons" and "obscurities" are mentioned in one of the Mahatma Letters, using a translation from the Chinese available at the time by Samuel Beal.[1] In this letter, Mahatma K.H. wrote:

Look around you, my friend: see the "three poisons" raging within the heart of men — anger, greed, delusion, and the five obscurities — envy, passion, vacillation, sloth, and unbelief — ever preventing them seeing truth.[2]

The four noble truths are:

2- The truth of the origin of dukkha

3- The truth of the cessation of dukkha

The Noble Eightfold Path is one of the principal teachings of the Buddha, who described it as the way leading to the cessation of suffering (dukkha) and the achievement of self-awakening:

In the Madhyamaka tradition Nirvana is understood as the absence of attachment, aversion and delusion with no possibility of their return. There is also broad agreement that language is limited to the everyday level of understanding and that the truth of nirvana is beyond the reach of language and of the conceptualization that makes language possible.[3] However, some interpret it merely as the cessation of consciousness.

H. P. Blavatsky and her Masters claimed that the esoteric teachings of Buddhism are different from the commonly known ones. For example, in her fist book, Isis Unveiled, she wrote:

When we use the term Buddhists, we do not mean to imply by it either the exoteric Buddhism instituted by the followers of Gautama-Buddha, nor the modern Buddhistic religion, but the secret philosophy of Sakyamuni, which in its essence is certainly identical with the ancient wisdom-religion of the sanctuary, the pre-Vedic Brahmanism.[4]

In stanza I, sloka 4 of The Secret Doctrine the nidanas are called "the great causes of misery".[5] Mme. Blavatsky defined them as follows:

The twelve Nidanas or causes of being. Each is the effect of its antecedent cause, and a cause, in its turn, to its successor; the sum total of the Nidanas being based on the four truths, a doctrine especially characteristic of the Hînayâna System. They belong to the theory of the stream of catenated law which produces merit and demerit, and finally brings Karma into full sway. It is based upon the great truth that re-incarnation is to be dreaded, as existence in this world only entails upon man suffering, misery and pain; Death itself being unable to deliver man from it, since death is merely the door through which he passes to another life on earth after a little rest on its threshold—Devachan.[6]

Q. Are Nidâna and Maya (the great causes of misery) aspects of the Absolute?
A. Nidâna means the concatenation of cause and effect; the twelve Nidânas are the enumeration of the chief causes which produce the severest reaction or effects under the Karmic law. Although there is no connection between the terms Nidâna and Maya in themselves, Maya being simply illusion, yet if we consider the universe as Maya or illusion, then certainly the Nidânas, as being moral agents in the universe, are included in Maya. It is Maya, illusion or ignorance, which awakens Nidânas; and the cause or causes having been produced, the effects follow according to Karmic law. To take an instance: we all regard ourselves as Units, although essentially we are one indivisible Unit, drops in the ocean of Being, not to be distinguished from other drops. Having then produced this cause, the whole discord of life follows immediately as an effect; in reality it is the endeavour of nature to restore harmony and maintain equilibrium. It is this sense of separateness which is the root of all evil.[7]

Mme. Blavatsky defined them as follows:

Aryasatyâni (Sk.). The four truths or the four dogmas, which are (1) Dukha, or that misery and pain are the unavoidable concomitants of sentient (esoterically, physical) existence; (2) Samudaya, the truism that suffering is intensified by human passions; (3) Nirôdha, that the crushing out and extinction of all such feelings are possible for a man “on the path”; (4) Mârga, the narrow way, or that path which leads to such a blessed result.[8]

According to her, there is an esoteric rendition of them, which is known to Initiates:

Q. Are the Four Truths of the Hinayâna school the same as those mentioned by Sir Edwin Arnold in “The Light of Asia”; the first of which is the Path of Sorrow; the second of Sorrow’s cause: the third of Sorrow’s ceasing; and the fourth is the WAY?
A. All this is theological and exoteric, and to be found in all the Buddhist scriptures; and the above seems to be taken from Singhalese or Southern Buddhism. The subject, however, is far more fully treated of in the Aryasangha School. Still even there the four truths have one meaning for the regular priest of the Yellow Robe, and quite another for the real Mystics.[9]

Alone the Initiate, rich with the lore acquired by numberless generations of his predecessors, directs the “Eye of Dangma” toward the essence of things in which no Maya can have any influence. It is here that the teachings of esoteric philosophy in relation to the Nidanas and the Four Truths become of the greatest importance; but they are secret.[10]

H. P. Blavatsky rejected the interpretation that Nirvāṇa is simply the annihilation of consciousness. See Nirvāṇa.