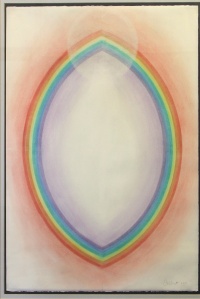 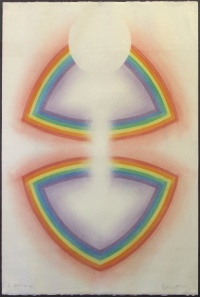 Burton Harry Callicott was a Theosophist from Memphis, Tennessee who incorporated Theosophical concepts into his paintings and drawings. His work has been described as "the relationship between nature and the human spirit, epitomized in the effects of light."[1] Three of his paintings were donated by the artist and his family for the collection of the Theosophical Society in America: Antahkarana, Mandorla, and Mandorla #12.

Callicott was born December 28, 1907 in Terre Haute, Indiana. When he was four years old, his family moved to Memphis. After graduation from the Cleveland School of Art in 1931, he returned to Memphis to teach in public schools. Like many Depression-era artists, he found temporary employment under a federal agency. The Federal Public Works of Art Program commissioned him to paint murals for the stairway of the Memphis Pink Palace Museum. The exploration of the Mississippi River by Hernando de Soto was the subject of the murals.[2][3]

During this period, Callicott began working with his stepfather Michael Abt in the design of floats for the Memphis Cotton Carnival and Christmas parades. They shared this activity for 20 years beginning in 1932.

Evelyne Baird married Burton Callicott in 1932, and they spent more than 60 years together. The couple had two children. Their small house in Memphis had an artist's studio with north-facing skylight and rainbows hanging in the window.[4]

Late in the 1950s, Callicott developed an interest in Theosophy. He joined the Theosophical Society in America in 1959 and became a life member.[5] For many years he participated in the Memphis Lodge activities, and he wrote articles for Theosophical periodicals. He considered himself to be mystically inclined, but not a mystic.[6]

Callicott taught at the Memphis College of Art from 1937 to 1973, and then retained emeritus status until his death. According to a colleague, he was a well loved professor, with an open door and a gentle, receptive attitude toward students.[7]

Early in his career, Callicott painted naturalistic landscapes. He explored many media in his works, using charcoal, pastel, dry color pigments, oils, and glazes. Light contrasted with shadows, and light refracted into rainbows are frequent components of Callicott's art. He prepared his own canvases, acetate stencils, and frames. His technique often involved many layers of transluent glazes, and he often had to restretch his canvas repeatedly. 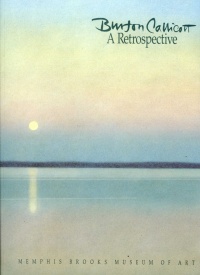 The Memphis Academy of Art, now the Memphis College of Art, exhibited Callicott's work in 1971. The artist had many exhibitions in Memphis and throughout the South.

In 1991, the Memphis Brooks Museum of Art held a retrospective exhibition of the artist's work, curated by Patricia P. Bladon. Callicott was then 83 years old. Forty-works?? were exhibited and a beautiful exhibition catalog was issued. The cover shows a fragment of Callicott's 1980 work, Moonrise Over Nauset Beach, which is executed in oil on canvas.