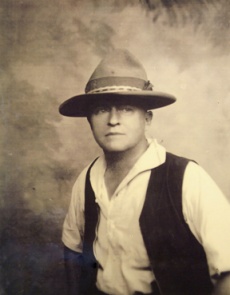 Cabot Yerxa was born June 11, 1883 in Pembina County North Dakota, in the Sioux Territory, at his parents' trading post.[1]

Cabot trained in Paris at the Academie Julian art school. The major art work of his life was his pueblo-style home. Construction began in 1941 and continued until his death in 1965 at the age of 81. Built in Hopi style, the sprawling structure comprised four-stories, 5000 square foot (465 sq.m), with 35 rooms, 150 windows, 65 doors and 30 different roof levels. He intended it to become an artists' colony.

Records of the Theosophical Society in America show that Yerxa joined the Society on August 7, 1954 and remained a member until his death on March 5, 1965. He was a "National" member, indicating that he was not active in any local branch or study group.[2][3]

Desert Hot Springs honored the artist by naming a school the "Cabot Yerxa Elementary School."[4] His accomplishments are featured in the Cabot's Pueblo Museum.[5]