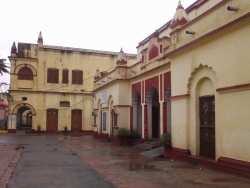 Central Hindu College, now known as Central Hindu School, is located in Varanasi, India. It is one of India's largest schools, with about 2000 boys and 1700 girls. It is governed by Banaras Hindu University, with which it has been closely associated since 1915.

Annie Besant established the school in July, 1898, with a vision of educating Indian children based on Hindu philosophy.[1] Among the other founders was Rai Pyare Lāll Sāhab. The first principal was Dr. Arthur Richardson, an English science teacher. [2] Shortly after the school opened, George S. Arundale was appointed as a Professor of History. In 1908, he was appointed Headmaster of the Central Hindu College School, and later Principal of the College. He was very popular with both teachers and students.[3] 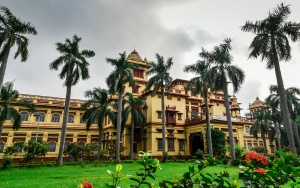 Pandit Madan Mohan Malaviya, an Indian educator, journalist, and politician, supported the school by raising 250,000 rupees to build a hostel for students. He met with Annie Besant in April 1911 and formed an agreement to work together to establish a university in Varanasi.[4]

Dr. Rajendra Prasad gave this account of the formation of Banaras Hindu University:

The Central Hindu College is the nucleus of the Banaras Hindu University. It was founded in July 1898 by the illustrious Dr. Annie Besant with the object of imparting sound secular education, combined with moral and religious instruction, based on the fundamental tenets of Hinduism. The College prepared students for the M.A. and M.Sc. and lower examinations of the Allahabad University till the year 1917. Three years earlier, the management and control of the College had passed from the hands of its original trustees to the Hindu University Society, which was carrying on the work of inaugurating the present University.

The University was incorporated by Act XVI of 1915 of the Imperial Legislature (the Banaras Hindu University Act), which came into force in March 1916. The Hindu University Society was dissolved by the Act and the University took its place. By a notification issued by the Government in October 1917, the Central Hindu College became a constituent College of the new University. Its students were first presented for the examinations of the new University in 1918 under the Faculties of Arts and Science. The College had the Departments of English, Sanskrit, Philosophy and Logic, History and Economics, Mathematics, Physics, Chemistry, Biology, and Religion in the year 1917, and it had 400 students on its rolls in April 1918. The number of students continued to increase and at the close of the third year, April 1920, there were 1,109 students on the rolls of the College. The number of teachers also increased, and separate departments were created for History and Economics. Till August 1921, it continued to occupy the grounds and buildings, in which it had been located, at Kamachcha, in the city. On the completion of the present building in the new campus at Nagwa. now named Malaviyanagar. and on the formal opening of the building by the then Prince of Wales, later King Edward VIII, it moved to its present habitation. The new home of the College had cost the University over rupees four lakhs.[5]

Once the new university campus was established, all college-level courses of study were transferred there. Annie Besant's institution was renamed as Central Hindu School, where classes are still offered for grades 6-12.