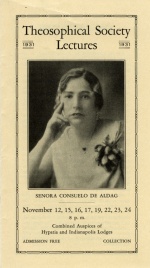 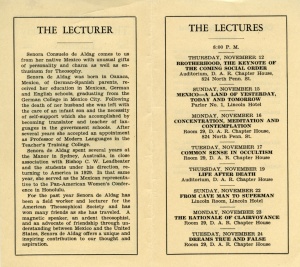 While visiting Detroit Lodge, she gave a public talk on "Mexico, Land of Yesterday, Today and Tomorrow," illustrated by stereopticon slides and delivered in Mexican costume. Her numerous lectures for lodges of the Michigan Federation were highly praised.[7]

Mrs. Aldag's writings in English are not numerous, but she did write some letters to publications and individuals, in which her vivacity shines through. In Milwaukee, she was staying with nonmembers, and arrived at 7:55 p.m. for her scheduled 7:30 lecture. She wrote to National Secretary Etha Snodgrass, "The public which filled the hall and which had been entertained with music, announcements, etc., burst into a hearty, warming applause when I entered, clad in my Nile green dress and my Mexican jade! It is such fun when you feel you have your public with you!” She wrote on to express concern that TSA members were not “elastic” and inclusive.

I see more and more the point of the younger Theosophists, Krishnaji at the lead, and have a horror that our wonderful Theosophical Society may degenerate into another sect. In this Lodge several people have been turned away because they have been scolded for wearing furs or eating meat, etc. It seems to me that living Love does more than preaching non-wearing of furs ‘outrance’ and whether the advice is given at an opportune moment or comes like a blight to nip the buds of interest just showing themselves in enquirers! I am going to write something for the Messenger, if I have time.[8]

She also felt that the Lodge focused on recruiting members, and not enough on educating them in basic Theosophy after they joined. “We expect them to do all of the work without any coaxing, we do not provide sufficient mental stimulus in the way of ‘only for members’ classes in Theosophy, Comparative Religion, etc.”[9]

Senora De Aldag has returned from another tour after a very happy and busy summer in her native Mexico. Her work began in Iowa and the lodges there have found her talks and lectures stimulating and helpful. There is magic in smiling friendliness and this is the art which Senora De Aldag has mastered, and which wins responsiveness everywhere. She has been successful also in giving a number of talks on Mexico to student groups, and while in Ames the Dean of the Home Economics Department gave a luncheon in her honor which resulted in excellent publicity and later in an invitation to address the students. [10]

The Chicago Daily News for May 18 carried an Associated Press News item announcing that Mrs. Aldag was one of the speakers for the round-the-world telephone conversation, sponsored by the World Federation of Education Associations in cooperation with the National Council for Prevention of War. The account includes an attractive photograph of Mrs. Aldag, and we are sure that the friendliness of her smile carried goodwill over the wires.[11]

In 1964, The Theosophist published her article, The Chakras in Pre-Hispanic Monuments in America.[12]