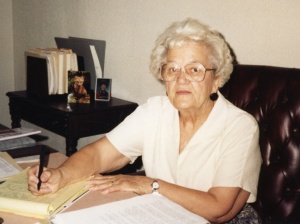 Dorothy Abbenhouse was an American Theosophist who served as President of the Theosophical Society in America from 1987 to 1993.

Dorothy Enoch was born in Michel, British Columbia on February 21, 1915. She married John Abbenhouse (November 25-1912 - June 4, 2006) on August 2, 1941 in Vancouver, BC. That same day the couple crossed into the United States, and Dorothy applied to become a naturalized American citizen. John was born in Bonner, Idaho, but lived in Seattle most of his life. He worked for a while as a riveter, and eventually became an engineer at the Boeing Corporation, with a stint as a Navy office during World War II. The couple had two daughters.

Dorothy and John worked together very closely in life. When they moved to Wheaton, Illinois during her presidency, John served the Society in many ways, and established beautiful flower gardens on the grounds of the Olcott campus. 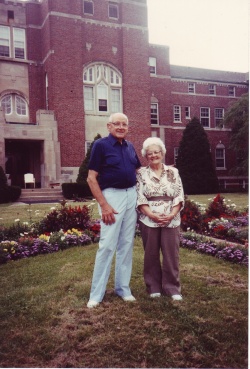 Dorothy and John Abbenhouse at Olcott

Mrs. Abbenhouse became a member of the Canadian Federation of the Theosophical Society in September 1937 when she was 22 years old.<"Anniversary Congratulations" The Quest 88.1 (January 2000), 31.</ref> She transferred her membership to the Theosophical Society in America on September 10, 1946, where she became a charter member of the Seattle Lodge.[1] She served as president of that lodge and also of the Northwest Federation. For the first three years of its operation, she was manager of the Quest Bookshop in Seattle. She also served on the Board of Trustees of the Orcas Island Foundation, and worked with her husband John at Camp Indralaya as resident managers for fourteen years. Together they co-chaired the National Education Committee of the Society. Her special interests were described as "development of learning-doing centers for theosophical members to encourage members, and particularly young people, to become involved in the work of the Society."[2]

After assuming the presidency, one of the first things she did was to tour as many branches and study centers as possible, "asking the members what they wanted in the TS, what changes they thought necessary, what innovations. She really listened ... to all their ideas, took them back to the National Center and set about trying to apply them. She really cared about the thoughts and perceptions of the grass roots members."[3] During 1988 and 1989, numerous members responded to this openness by submitting to The American Theosophist articles filled with suggestions. The concept of envisioning "TS 2000" expanded to the international level during the General Council meeting in December, 1987, when President Radha Burnier encouraged General Secretaries of the national Sections to engage members in discussing the future.

One major change involved the Society's periodicals. The American Theosophist was converted from a monthly magazine to a bimonthly newsletter, and a new public magazine, The Quest, was introduced. Editor William Metzger wrote that

[the AT] has been ongoing a transformation in the past year - first when it shifted to a bimonthly publication schedule at the time of the launching of The Quest then gradually in content as increased emphasis has been placed on promoting dialogue about Theosophy and the society.

Beginning with the September/October 1989 issue the AT will change from its magazine format to a newsletter format.[4]

Initial response to The Quest was very positive, with a distribution of over 16,000 copies for the first issue. The Kern Foundation was very supportive of this effort to reach the general public more effectively.

In 1989, a leadership conference was held at Olcott campus, bringing together fifteen people from Spanish-speaking groups in California, Chicago, Florida, Massachusetts, New York, and Texas. Spiritual retreats were scheduled in eight locations during that year, jointly sponsored by the Society, the Krotona School of Theosophy, five Theosophical camps, and the Ohio Valley Federation.

At the suggestion of John Kern, the Society instituted the Annual Fund to increase donations each year.

Mrs. Abbenhouse was heavily involved in planning the Society's extensive involvement in the 1993 Parliament of the World's Religions in Chicago. For that event, TSA staff members worked with the United Lodge of Theosophists and the Theosophical Society based in Pasadena, California to prepare over 20 Parliament lectures and panel discussions. Many sessions were videotaped by workers from the TSA and the other organizations. 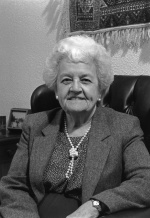 Like other presidents of the Theosophical Society in America, Mrs. Abbenhouse served as editor of the national magazine, which at that time was known as The American Theosophist. She contributed a "Viewpoint" column to every issue beginning with July-August of 1987. The Union Index of Theosophical Periodicals lists articles by and about her.