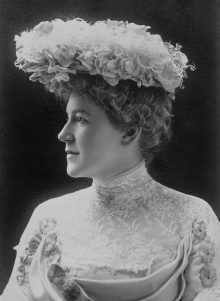 Ella Wheeler Wilcox (November 5, 1850 – October 30, 1919) was an American poet and journalist who was keenly interested in Theosophy, New Thought, Rosicrucianism, and Spiritualism. An enormously popular writer whose verses were criticized by the academic world, her most famous lines are still quoted from her poem "Solitude":

Laugh and the world laughs with you

Weep, and you weep alone.

Ella Wheeler was born November 5, 1850, in the village of Johnstown, Rock County, Wisconsin. Her parents were Marcus H. Wheeler, a teacher of dancing, music, and deportment, and Sarah Pratt Wheeler. They had three older children.

Within two years, the family resettled in Westport, Dane County, Wisconsin, where Ella lived until her marriage. The Pratt side of the family were literary enthusiasts, and the household had a large library. Her mother encouraged study of Shakespeare, Byron, Burns, and other poets. Ella was educated in a local one-room school that was subsequently named after her. She attended the University of Wisconsin for one term, but regarded it as waste of time and returned home.

While she was visiting friends in Milwaukee, she was noticed by a silver salesman, Robert Wilcox, in a jewelry store. He sought her acquaintance, and they met at friends' homes in Chicago and Milwaukee. Robert Wilcox and Ella Wheeler were married on May 1, 1884.[1]

In 1884, she married Robert Wilcox of Meriden, Connecticut, where the couple lived before moving to New York City and then to Granite Bay in the Short Beach section of Branford, Connecticut. The two homes they built on Long Island Sound, along with several cottages, became known as Bungalow Court, and they would hold gatherings there of literary and artistic friends. They had one child, a son, who died shortly after birth [in 1887]. Not long after their marriage, they both became interested in theosophy, new thought, and spiritualism.[2]

They loved to travel, and circled the globe twice. Ella enjoyed dancing, singing in a fine soprano voice, and playing the mandolin. They met many great leaders like Luther Burbank, Robert Ingersoll, Jack London, Elbert Hubbard, and H. Spencer Lewis. Robert retired in 1906, and the couple settled at Short Beach, Connecticut. Ella began a syndicated advice column for the Hearst Newspapers based on the concepts of New Thought. She was devastated when Robert died on May 21, 1916.

Early in their married life, Robert and Ella Wheeler Wilcox promised each other that whoever went first through death would return and communicate with the other. Robert Wilcox died in 1916, after over thirty years of marriage. She was overcome with grief, which became ever more intense as week after week went without any message from him. It was at this time that she went to California to see the Rosicrucian astrologer, Max Heindel, still seeking help in her sorrow, still unable to understand why she had no word from her Robert. She wrote of this meeting:

In talking with Max Heindel, the leader of the Rosicrucian Philosophy in California, he made very clear to me the effect of intense grief. Mr. Heindel assured me that I would come in touch with the spirit of my husband when I learned to control my sorrow. I replied that it seemed strange to me that an omnipotent God could not send a flash of his light into a suffering soul to bring its conviction when most needed. Did you ever stand beside a clear pool of water, asked Mr. Heindel, and see the trees and skies repeated therein? And did you ever cast a stone into that pool and see it clouded and turmoiled, so it gave no reflection? Yet the skies and trees were waiting above to be reflected when the waters grew calm. So God and your husband's spirit wait to show themselves to you when the turbulence of sorrow is quieted.

Several months later, she composed a little mantra or affirmative prayer which she said over and over "I am the living witness: The dead live: And they speak through us and to us: And I am the voice that gives this glorious truth to the suffering world: I am ready, God: I am ready, Christ: I am ready, Robert."[3]

Mrs. Wilcox undertook a lecture and poetry-reading tour of Allied army camps in France from February to September, 1918. She published an autobiography, The Worlds and I that same year. These efforts worsened her health as she suffered from breast cancer. She passed away in Connecticut on October 30, 1919. Announcements of her death were printed in newspapers all over the United States and Canada.[4]

Mrs. Wilcox was admitted as a member of the American Theosophical Society on October 14, 1913 in New Haven, Connecticut.[5] Her autobiography, The Worlds and I, makes mentions of Theosophy, Elliott Coues, Emily Lutyens, and L. W. Rogers.[6] Her positive attitude and poetry were frequently mentioned in Theosophical publications.

This poem appeared in The Theosophical Messenger in 1902, cited by William John Walters as a good way to convey some concepts of Theosophy to children.

You never can tell what your thoughts may do,

In bringing you hate or love,

For thoughts are things, and their airy wings

Are swifter than carrier dove.

Each thing must create its kind –

And they speed o'er the track to bring you back.

Whatever went out of your mind.[7]

This poem, "Climbing," published in 1910, expresses concepts that would be distinctly familiar to Theosophists, of a spiritual path and the need to "Try":

Who climbs the mountain does not always climb,
The winding road slants downward many a time;
Yet each descent is higher than the last.
Has thy path fallen ? That will soon be past.
Beyond the curve the way leads up and on,
Think not thy goal forever lost or gone.
Keep moving forward; if thine aim is right
Thou canst not miss the shining mountain height.
Who would attain to summits still and fair,
Must nerve himself through valleys of despair.

So many gods, so many creeds,
so many paths that wind and wind
while just the art of being kind
is all the sad world needs.

She, along with Frater Hubbard, H. Spencer Lewis, and J.K. Funk, president of Funk and Wagnalls Publishing Co., (publishers of the Literary Digest and the Standard College Dictionary), became interested in the birth of the Rosicrucian movement in America. All four became officers of the Rosicrucian Research Society. The society held monthly meetings from 1904 to 1909 in New York City. As they were not chartered or authorized to use the name Rosicrucian [or equivalents as required purely under the Western esoteric tradition], they operated publicly as the New York Institute for Psychical Research.

Much thanks to the efforts of H. Spencer Lewis proper contacts and authorities to commence the Rosicrucian movement for the 20th Century in America were obtained. In 1915 a Rosicrucian charter was granted with H. Spencer Lewis as Imperator. Ella Wheeler Wilcox was appointed as a member of the first Supreme Council of the American Rosicrucian movement, and thus, she played an active role in establishing it. She served as a Supreme Council officer until her death in 1919.[8]

As an 8-year-old child, Ella first wrote a story, in which the characters were all named for flowers - Mr. Hollyhock, Miss Dahlia, Mr. Nasturtium, and so on. Her mother encouraged Ella to do more writing.[9] At the age of 14, Ella Wheeler submitted two articles to Mercury Magazine and they were published. Always maintaining a positive attitude, she methodically sent her poems to one publisher after another until they were accepted. Her first big sale was forty dollars from Frank Leslie's Magazine. She was already well known by 1880, but the poem that brought her true fame was "Solitude," published in the February 25, 1883 issue of the New York Sun.

The inspiration for the poem came as she was travelling to attend the Governor's inaugural ball in Madison, Wisconsin. On her way to the celebration, there was a young woman dressed in black sitting across the aisle from her. The woman was crying. Miss Wheeler sat next to her and sought to comfort her for the rest of the journey. When they arrived, the poet was so depressed that she could barely attend the scheduled festivities. As she looked at her own radiant face in the mirror, she suddenly recalled the sorrowful widow. It was at that moment that she wrote the opening lines of "Solitude":

Laugh, and the world laughs with you
Weep, and you weep alone.
For the sad old earth must borrow its mirth

But has trouble enough of its own

She sent the poem to the Sun and received $5 for her effort. It was collected in the book Poems of Passion shortly after in May 1883. [10]

Mrs. Wilcox wrote over one hundred volumes of poetry, fiction, and nonfiction, and became a household name. While her poetry was popular, it was not highly regarded by literary critics:

Beginning with the publication of Poems of Passion in 1883 and continuing through the first decades of the twentieth century, Ella Wheeler Wilcox (1) was quite possibly the most commercially successful and most ridiculed poet in the English-speaking world. On the one hand, her popularity was indisputable; as her obituary in the London Times put it, she was "the most popular poet of either sex and of any age, read by thousands who never open Shakespeare" ("Death of Ella Wheeler Wilcox").

Yet her reputation was also bad, as the Literary Digest noted: "Few poets in American letters made so sudden and sensational a success as she did with her initial volume, 'Poems of Passion,' and most persons to whom such luck befell would not have had the staying power to pass through nearly a generation of more or less kindly treatment as a joke" ("Current Poetry" 38).[11]

A Rosicrucian who appreciated her work wrote:

Her prolific prose and poetry are a tour de force of optimism, of the triumph of hope over despair, of victory over failure, of good over evil, of kindness over selfishness. She gave no quarter to negativity. The harshness of life was but an opportunity to change lead into gold. She was a transcendental alchemist. We know the artistic works of Leonardo da Vinci led to his description as a master of chiaroscuro, i.e., the lay of light on darkness. Ms. Wilcox was such an artist. She did with her pen what he did with his brush. She had a mastery of expressing with words the play of light and hope and creativity upon dreariness and hopelessness and destructiveness. We have many good, more sophisticated writers. However, Ms. Wilcox’s strength is her simplicity. She had the knack of getting to the heart of the most complex of everyday human problems.[12]

Her literary work was enjoyed enormous popularity with the general public, and was much appreciated by Theosophists. Irish poet and educator Dr. James Cousins mentioned "Ella Wheeler Wilcox, who, if she be not conceded a place with the major poets, has influenced many thousands by her verses."[13] Altogether she wrote about 100 books of poetry, fiction, and nonfiction, and lyrics to some published songs. A bibliography has been written by Richard A. Edwards.

These are collections of her poetry.

These are book-length poems:

Several of her poems were the basis for silent film treatments:

Mrs. Wilcox was widely published in popular magazines and newspapers. Her poems were reprinted in hundreds of issues, and she also contributed editorials, articles, and columns.