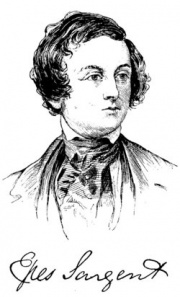 Epes Sargent (September 27, 1813– December 30 1880) of Boston was an American editor, poet and playwright. He was very interested in spiritualism and was acquainted with Helena Petrovna Blavatsky.

Epes Sargent was born September 27, 1813 as the son of a Gloucester, Massachusetts sea captain.

Sargent worked as a newspaperman and editor. He also wrote plays, poems, lyrics, and other works.

Epes Sargent is best remembered as the author of the lyrics of one of the best-known nautical songs of the nineteenth century. In addition to American Adventures by Land and Sea (1841) and other works meant for a schoolhouse audience, Sargent was the author of several historical romances, a few comic pieces, two books on spiritualism, and a number of poems and sonnets. But his fame rests on the single poem, “A Life on the Ocean Wave,” which was set to music by Henry Russell and published about 1838. The song was an instant hit, not only among the public ashore who were inspired by its romantic imagery of the jaunty sailor class but by seafarers, who longed to live the life it described. The poem later appeared in Sargent’s anthology Songs of the Sea with Other Poems (1847), but it was as song lyrics that it continued to be reprinted into the twentieth century. by Mary Malloy (2000)[1] 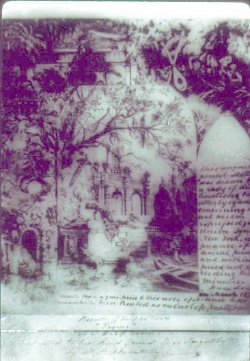 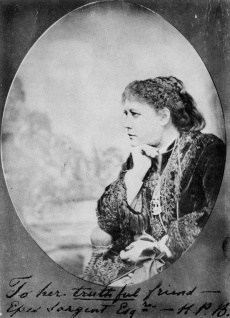 In 1874, Madame Blavatsky became acquainted with Epes Sargent. She gave him a drawing made in the dark by means of precipitation, purportedly in March 1874.

A message was written on the right side of the drawing by an unknown hand:

This unfinished pencil sketch was drawn by a lady of distinction, but utterly ignorant concerning the art hereon expressed, at Union Square, New York, in the presence of several persons and within a period of not exceeding 30 minutes. This was done on March 1874, more than a year prior to this note of it and has meanwhile been treated as valueless paste-board.

Below the precipitation H.P.B. wrote the following message: "Result of half an hour's "Trying" in the dark room. Presented to her kind friend Epes Sergeant by H.P. Blavatsky."

She read Sargent's Proof Palpable of Immortality, and wrote of it to F. J. Lippitt on March 7, 1875.[2] She devoted a long paragraph to Sargent in Isis Unveiled, Volume I:

Perhaps, among the whole body of spiritualist writers of our day, not one is held in higher esteem for character, education, sincerity, and ability, than Epes Sargent, of Boston, Massachusetts. His monograph entitled The Proof Palpable of Immortality, deservedly occupies a high rank among works upon the subject. With every disposition to be charitable and apologetic for mediums and their phenomena, Mr. Sargent is still compelled to use the following language: "The power of spirits to reproduce simulacra of persons who have passed from the earth-life, suggests the question — How far can we be assured of the identity of any spirit, let the tests be what they may? We have not yet arrived at that stage of enlightenment that would enable us to reply confidently to this inquiry. . . . There is much that is yet a puzzle in the language and action of this class of materialized spirits." As to the intellectual calibre of most of the spirits which lurk behind the physical phenomena, Mr. Sargent will unquestionably be accepted as a most competent judge, and he says, "the great majority, as in this world, are of the unintellectual sort." If it is a fair question, we would like to ask why they should be so lacking in intelligence, if they are human spirits? Either intelligent human spirits cannot materialize, or, the spirits that do materialize have not human intelligence, and, therefore, by Mr. Sargent's own showing, they may just as well be "elementary" spirits, who have ceased to be human altogether, or those demons, which, according to the Persian Magi and Plato, hold a middle rank between gods and disembodied men.[3]

In letters to Professor Corson, HPB referred to Sargent as an "earnest, honest" spiritualist, and to several instances when she used Sargent as a messenger to Elbridge Gerry Brown.[4]

These are a few of the books Sargent wrote in the areas of biography, poetry, drama, instruction, and popular nonfiction: