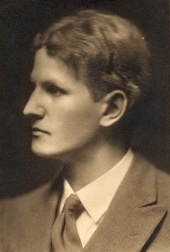 Roberts was born in Surrey, England on July 22, 1901 to Percy and Gertrude Roberts.[1] He studied art at the Slade School in London.[2]

On April 19, 1920, Roberts became a member of the Theosophical Society in England & Wales.[3] In 1921 the Roberts family with son Erling, 20 and daughter Monica, 10, boarded the SS Berrima in London and traveled to Sydney, Australia.[4] Erling continued his education, studying for three years with portrait artist George Lambert.[5] Erling and Monica became active in the group of young people of Theosophists at The Manor in the early 1920s, and Erling eventually married Australian Muriel Blanche Beaufoy, another Manorite.

Life and career in California

By 1934, Erling and Muriel had left Australia for southern California. Their son Gavern was born on June 26, 1933, and Malcolm on November 5, 1936.[6] The family lived in Los Angeles, Covina, and later Ojai.

Roberts made his living as an artist, working on landscapes, pen-and-ink drawings, murals, and especially, portraits. His work was well-regarded, and was exhibited at the Assistance League in Los Angeles, 1938; Friday Morning Club (LA), 1940; Pomona College, 1947; San Gabriel Valley Artists, 1950. His work is on display in the Interior Department in Washington, DC.[7] 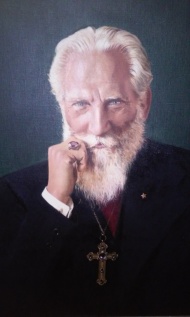 Roberts painted the portrait of C. W. Leadbeater that in in the collection of the L. W. Rogers Building on the Olcott campus in Wheaton, Illinois. The American Theosophist reported:

All those who admired the portrait of Bishop C. W. Leadbeater, painted by Mr. Erling Roberts, of Los Angeles, at Convention and Summer School this year will be happy to learn that we have been able to secure this portrait for permanent exhibition at Headquarters. It is truly a work of art and we feel vey fortunate in having been able to persuade Mr. Roberts to part with it. We understand that many expressed the hope that it could be acquired for Headquearers and offered to subscribe to its purchase. Gifts for that purpose will now be welcome.[8]