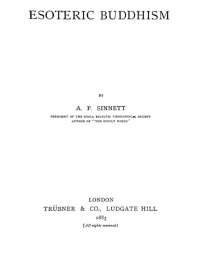 In February, 1883, the Sinnett family moved from Allahabad back to England, visiting the new Theosophical Society headquarters at Adyar along the way. Mr. Sinnett wrote: " I had already begun to write Esoteric Buddhism and went on with the work during our stay at Adyar."[1] He then described the incidents surrounding receipt of Mahatma Letter No. 108 in the "Shrine Room" in Blavatsky's quarters.

The book came off the press on June 10, 1883.[2] Shortly after it was published, there appeared in The Theosophist a very important series of articles titled, "Some Inquiries Suggested by Mr. Sinnett's Esoteric Buddhism." These were written, or caused to be written, by three adepts. Largely as a result of these articles, Sinnett prepared an "annotated and enlarged" edition of Esoteric Buddhism, which constitutes the 1885 fifth edition.

Be certain, that with a few mistakes and omissions notwithstanding, your "Esoteric Buddhism" is the only right exposition — however incomplete — of our Occult doctrines. You have made no cardinal, fundamental mistakes; and whatever may be given to you hereafter will not clash with a single sentence in your book but on the contrary will explain away any seeming contradiction.[3]