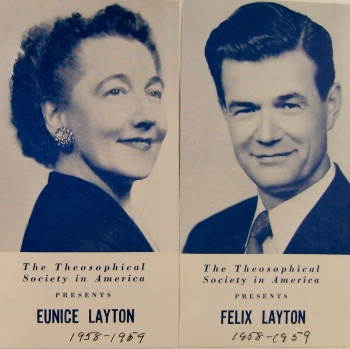 Eunice Layton was an American Theosophical worker who was married to Felix Layton.

A publicity flyer about her from about 1960 says:

Eunice Layton has recently returned to the United States after a period of study and service at the International Headquarters of The Theosophical Society at Adyar, Madras, India. During the past few years, she and her husband, Mr. Felix Layton, have lectured in New Zealand, Australia, Indonesia, Malaya and Ceylon, ans well as in India and Pakistan. They also completed a six-month lecture tour in Europe, before returning to the International Headquarters of the Society where Mrs. Layton has been in charge of the Department of Information.

Mrs. Layton, a native of Salt lake City, has had careers in a number of different fields. While still in high school, she established a school of ballet and dancing. At the University of Utah she specialized in physical therapy and dramatics and later taught for five years in high school and junior college. Moving to San Francisco, she opened a physical therapy establishment. Following World War II, she returned to the teaching profession, at the same time completing work on her M.A. degree in education at Stanford University.

A member of The Theosophical Society since 1945, Mrs. Layton served for nearly two years on the staff of the National Headquarters as head of the Department of Information. From 1954 to 1959, she and her husband travelled throughout the United States, lecturing and conducting classes on Theosophy. In 1959, Mr. and Mrs. Layton began a world tour that took them to the International headquarters of the Society where they attended the School of the Wisdom, later serving as Assistant Directors of Study at that School. Mrs. Layton is co-author with her husband of the book, Some Basic Concepts of Theosophy.[1]