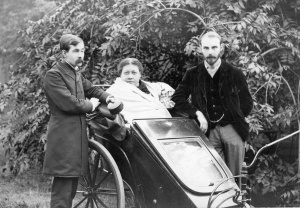 George Robert Stow Mead was an English Theosophist, scholar, and writer. He worked with Helena Petrovna Blavatsky and Annie Besant in editing periodicals before he founded The Quest Society. The November 1900 issue of The Theosophic Messenger noted that:

He is well known to all the members through his articles in the Theosophical Review, of which he is coeditor with Mrs. Besant, and his books, Orpheus, Plotinus, Simon Magus, Pistis Sophia, The World Mystery, and last (but decidedly not least) Fragments of a Faith Forgotten, which has just come from the press.[1]

In the words of one mid-20th century reviewer, Mr. Mead “was the most notable researcher with the rank and file of the Theosophical Society … he made outstanding and long-lived contributions in the way of Gnostic and Hermetic literature.”[2] Other scholars have noted that Mr. Mead would have had -- and would still have -- much higher standing in the world of academe were he not a Theosophist, but “Unhappily, academic prejudice changes exceedingly slowly in our culture.”[3] His contributions were “dedicated, scholarly, but eminently readable studies of the spiritual roots of Christian Gnosticism and, more generally, of personal religion in the Greco-Roman world. But his work encompassed much more than this. Mead was equally at home with Sanskrit texts, Patristic literature, Buddhist thought, and the problems of contemporary philosophy and psychical research. He devoted his intellectual energy to the complex interplay of Gnosticism, Hellenism, Judaism, and Christianity.”[4]

According to the alumni database at the University of Cambridge[5], George Robert Stow Mead was born in Nuneaton, Warwickshire, England, on March 22, 1863, to Robert and Mary Mead. His father, Col. Robert Mead, was an officer of the Royal Army Ordinance Corps.

George attended the King’s School in Rochester, Kent, and then St. John’s College at the University of Cambridge, where he won honors. He initially studied mathematics, then switched to Classics and received a B.A. degree in 1884. He returned several decades later and was awarded an M.A. degree in 1926.[6]

After receiving his B.A., Mr. Mead taught school for a time. He also studied Hinduism, and his interest in spiritualism led him to a short term at the French University of Clermont-Ferrand. He became aware of the Theosophical Society through his acquaintance with Bertram Keightley and Mohini Chatterji, as well as from A.P. Sinnett’s book Esoteric Buddhism.[7]

Mead was admitted as a member of the London Lodge of the Theosophical Society on January 20, 1886.[8] He was instrumental in forming the European Section of the Theosophical Society and, beginning July 9th, 1890, served as its first General Secretary. In 1899 Mead married Laura Mary Cooper (sister of Mrs. Cooper-Oakley). Around this time he was also an officer of the Blavatsky Lodge in London, first as vice-president and then as president.[9]

A true Theosophist, Mead was far more interested in doing good in the world than in doing well monetarily. He persevered in the face of serious financial struggles during 21 years of publishing The Quest (see below). He also devoted time to The Northbrook Society as its secretary.[10] A division of the British National Indian Association, the Northbrook Society originally (1880) was a clubhouse and reading room for Indian students and visitors to England. After relocating in 1910, Northbrook was able to offer a few rooms as temporary lodging for Indian visitors and students.[11]

George Mead met Mme Blavatsky within a year of joining the Theosophical Society, and by 1889 he had decided to devote himself full-time to the Society. He became H.P.B.’s private secretary:

“When I first went to her to work permanently (1889), I was a young man of whom she practically knew nothing, except that from May, 1887 . . . when she returned to England for the last time, I spent no little of my holidays in visits to Maycott, Upper Norwood, and to 17 Lansdowne Road, Bayswater. Nevertheless, with childlike confidence, and with one of those large and eccentric gestures of hers, she handed over to me at once the keys of her desk and bookcases and tossed over, unopened, her voluminous correspondence, bidding me answer it as best I might (and “be d--d”), as she wanted all her time for writing her articles and books . . . .”[12]

In addition to handling HPB's abundant correspondence for the last three years of her life, Mead also edited many of her published works. According to gnosis.org[13], he wrote anonymously for her magazine Lucifer beginning with the first volume (in 1887).

In August, 1890, he became a member of H. P. Blavatsky's Inner Group in London, which is where he met Laura Cooper, his future wife.

After the death of Mme Blavatsky in 1891, Mead worked with Annie Besant on editing much of HPB’s remaining works. Much of this material would become Volume III of The Secret Doctrine. He helped edit the Theosophical Glossary and The Key to Theosophy.[14] He also worked with Mrs. Besant as co-editor of Lucifer, until 1898 when it became The Theosophical Review, of which he was the sole editor.[15]

The Quest Society and The Quest

Mead and others founded The Quest Society in 1909. He was the editor of The Quest from 1909 to 1930. It was considered to be a continuation of The Theosophical Review, and is still considered to be valuable source material for scholars.[16] The website of the IAPSOP, which notes that the Quest Society was “designed to help those who [were] seeking an understanding of the purpose of life and the means of self-realization,” contains several volumes of The Quest.[17]

After The Quest ceased publication in 1930, Mr. Mead "still remained a member of several learned societies. Notably he took a keen interest in the recently founded Society for Promoting the Study of Religions and became a member of its Council."[18]