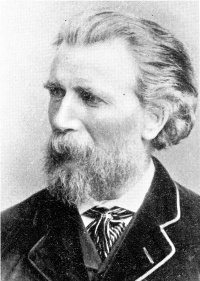 Gerald Massey (1828-1907) was an English poet and writer. A radical and freethinker, he was keenly interested in Egyptology and wrote about the possible Egyptian origins of Christianity. His writings had a large impact on Paul Gauguin.

Both Massey and [Jules] Soury were published in England by Annie Besant... while the founder [Madame Blavatsky] herself was a great admirer of Massey's studies in comparative mythology...

Virtually forgotten today, Massey had a brief moment of fame in the mid-nineteenth century as a radical poet admired for having risen from the appalling rural poverty into which he had been born in 1828... [It is] likely that Massey was one of the sources for the arid and querulous amateur scholar Mr. Casaubon in Middlemarch, who wasted his life attempting to produce the Key to all Mythologies, a work which so neatly parodies The Book of the Beginnings which Massey was writing ... that it is impossible to ignore the connection.. From 1869 onwards, Massey virtually gave up poetry for mythological studies of an incredibly detailed kind, using his formidable self-trained intellect to master Egyptian hieroglyphs, the Hebrew Kabbala, even Maori religious beliefs...

The first of his mammoth studies of world mythologies was published in 1881 and the preface is pure Casaubon it could well have been written by Eliot herself: 'In a Book of the Beginnings, I have endeavoured to trace the Egyptian Origenes in Words, Symbols, and Divinities, in Britain, Israel, Akkad and New Zealand, and connected much of the Typology with Inner Africa as the birthplace of all.'...

He seems to have seen his work as offering a cultural parallel to Darwin's zoological evidence, attempting to prove that all human culture had spread outwards from one point in a seamless wave across the continents, always retaining a deep inner, subconscious memory of its origins.[1]

Impact on The Secret Doctrine

In The Secret Doctrine, Helena Petrovna Blavatsky frequently does refer for support to A Book of the Beginning (1881) and The Natural Genesis (1883) by the British writer Gerald Massey, yet another author who, while not a Theosophist, relied heavily upon mystical writings and discussed in depth the meaning of geometric and other religions symbols. Massey's writings repeatedly state his unwillingness to accept theosophical dogmas over his own theory of "natural genesis" for the origin of the religious cosmologies.[2]