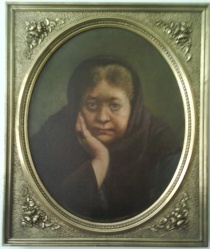 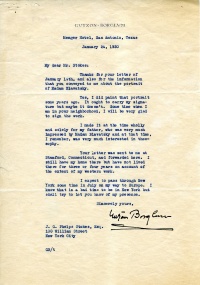 John Gutzon de la Mothe Borglum (1867-1941) was an American artist best known as the sculptor of Mount Rushmore, who painted an oil portrait of Madame Blavatsky.

This portrait was painted many years ago at the time when the artist's father was president of the Theosophical Lodge in Omaha, Nebraska. When his father requested the portrait he first carefully prepared himself psychologically by reading and studying the teachings of H. P. B., and then secluded himself completely for three whole days: the splendid portrait is the result...

Folowing the death of the artist's father and the adjustment of the estate, Dr. Besant expressed the thought that the portrait should be in the possession of the society. As a result of this suggestion several generous members combined together and made the purchase at a cost of about $1,000.

The painting, which at Dr. Besant's suggestion has been kept by Mr. [Henry] and Mrs. Hotchener in their home was recently shipped to Olcott where it will be a source of inspiration to many of our members.[1]

Since Madame Blavatsky was deceased by the time the portrait was created, Borglum worked from a famous photograph taken by Enrico Resta on January 8, 1889, in London. The painter wrote a letter in 1930 in which he confirmed working on the portrait. The painting now hangs in the Meditation Room of the L. W. Rogers Building at the headquarters of the Theosophical Society in America.