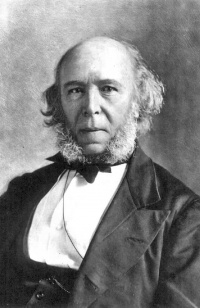 Spencer is best known for coining the expression "survival of the fittest" in his Principles of Biology (1864), after reading Charles Darwin's On the Origin of Species. He supported the theory of evolution and expanded it to embrace not only the development of the physical world and biological organisms but also of the human mind and culture.

He contributed to a wide range of subjects besides biology, including ethics, religion, anthropology, economics, political theory, philosophy, literature, sociology, and psychology.

Spencer's reputation among the Victorians owed a great deal to his agnosticism. However, Spencer insisted that he did not want to undermine religion in the name of science, but to bring about a reconciliation of the two.

Spencer argued that either from the point of view of religion or science, whether we are concerned proposing a Creator or a substratum that underlies our experience of phenomena, we can frame no conception of it. Therefore, religion and science agree in the supreme truth that the ultimate reality ('the absolute') cannot be grasped by human understanding, which is only capable of "relative" knowledge. For this reason H. P. Blavatsky wrote that Spencer "like Schopenhauer and von Hartmann, only reflects an aspect of the old esoteric philosophers, and hence lands his readers on the bleak shore of Agnostic despair..."[1] He called this principle "the Unknowable", and thought that the It represented the ultimate stage in the evolution of religion, the final elimination of its last anthropomorphic vestiges. In reference to this position, Mme. Blavatsky wrote:

Herbert Spencer has of late so far modified his Agnosticism, as to assert that the nature of the “First Cause,” which the Occultist more logically derives from the “Causeless Cause,” the “Eternal,” and the “Unknowable,” may be essentially the same as that of the Consciousness which wells up within us: in short, that the impersonal reality pervading the Kosmos is the pure noumenon of thought. This advance on his part brings him very near to the esoteric and Vedantin tenet.[2]

Regarding the nature of the "Unknowable", in one of his letters, Master K.H. wrote:

Under whatever form or mask motion may appear, whether as light, heat, magnetism, chemical affinity or electricity — all these must be but phases of One and the same universal omnipotent Force, a Proteus they bow to, as the Great "Unknown" — (See Herbert Spencer) and we, simply call the "One Life" the "One Law" and the "One Element".[3]

Blavatsky contended Spencer's questioning of the possibility of self-knowledge. For example, she quotes the following statement from Spencer:

The mental act in which self is known implies, like every other mental act, a perceiving subject and a perceived object. If, then, the object perceived is self, what is the subject that perceives? Or if it is the true self which thinks, what other self can it be that is thought of? Clearly, a true cognition of self implies a self in which the knowing and the known are one—in which subject and object are identified; and this Mr. Mansel rightly holds to be the annihilation of both! So that the personality of which each is conscious, and of which the existence is to each a fact beyond all others the most certain, is yet a thing which cannot truly be known at all; the knowledge of it is forbidden by the very nature of thought.[4]

To Spencer's conclusion that the knowledge of self or soul is thus “forbidden by the very nature of thought,” Blavatsky answers that the process of thinking is not watched by the psychological self, but by a "higher self":

The Higher Self or Buddhi-Manas, which in the act of self-analysis or highest abstract thinking, partially reveals its presence and holds the subservient brain-consciousness in review.[5]