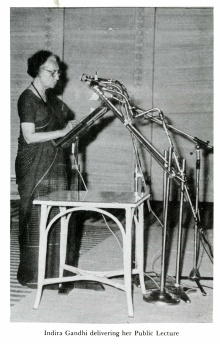 Indira Priyadarshini Gandhi (1917-1984) was the prime minister of India from 1966-1977 and 1980-1984. She was the only daughter of Prime Minister Jawaharlal Nehru, and was a prominent member of the Indian National Congress party. 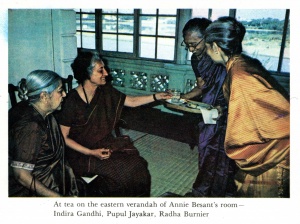 She was well acquainted with Theosophists such as Rukmini Devi Arundale and Radha Burnier. On at least one occasion lectured at the Adyar headquarters of the Theosophical Society; she closed the 1982 annual convention, speaking of the "Future of Man."[2]