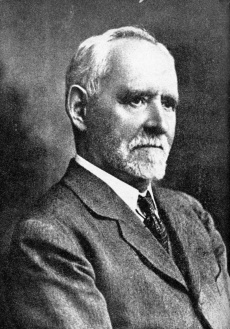 Joseph Bibby (1851–1940) was an English industrialist and member of the Theosophical Society based in Adyar, Chennai, India He is best known as the editor of Bibby's Annual.

He lived in a beautiful house and grounds near Birkenhead; and all his eight children, six boys and two girls, lived with him. I never met a happier family. They never quarreled and when the sons married, they built another house near their father's Two of his sons were killed in the first world war and another was badly wounded... Mrs. Bibby was a frail, sweet little lady of Quaker extraction... she started life with him in a working-man's cottage.

Often have I stayed at the Bibby's home. The first time I went there, the youngest boy and girl met me at the train. I noticed they were convulsed with giggles. At home Mrs. Bibby said to me: "You won't mind, but the children were so funny. I asked them if they found you easily, and they said, 'Oh! Yes Mama, there was such a strong smell of fish about.'"[1]

Joseph Bibby became a member of the Theosophical Society in Liverpool on January 23, 1889.[3]

Bibby met young Clara Codd, when she began touring England as a lecturer in 1906. She became a frequent visitor to the Bibby home. He proposed to send Clara for a two-year course at the Theosophical Society headquarters in Adyar, Madras, India, and financed the trip.

Of this enterprise, Clara Codd wrote,

His great delight was the editing of his famous Bibby's Annual. Many will remember its outstanding articles and its gloriously reproduced pictures. The articles were his way of helping the Theosophical Society, though he also gave large sums of money, too. Sometimes I would go with him to picture galleries of all kinds to find pictures to reproduce in his magazine. Because he would accept no advertisements, he lost, so he told me, a regular £1,000 a year on his journal. But he willingly lost it because of the good it did. It had a circulation all over the world of about one million. As far away as New Zealand did I discover Bibby's Annual."[4]

Theosophists the world about will learn with deep regret that Bibby's Annual for 1922 announces the discontinuance of that beautiful periodical. To learn that this masterpiece of artistic printing is to cease publication is much like hearing that a dear friend has passed on. For many years Bibby's Annual has carried the gospel of Theosophy into multiplied thousands of homes in all parts of the world. Its reading matter was edited with the same care that was given to the art subjects from which its wealth of pictures was drawn. "Perfection" is a word that should be used with caution, but it may safely be said of Bibby's Annual that very few things in any realm of human effort have come so near to the goal of perfection.[5]