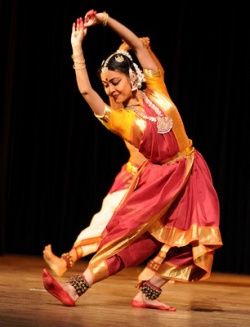 Kalākshetra is a foundation and school supporting dance and allied arts native to India. It was founded in 1936 by Rukmini Devi Arundale. According to the foundation's website:

It provides a holistic education in arts amidst a serene and inspiring natural environment cultivating a spirit of reverence...

Originally called the International Center for Arts, the organization was renamed as Kalākshetra, which literally means a holy place of arts (Kala: Arts, Kshetra: Field or Holy place).[2]

Rukmini Devi Arundale became interested in the classical dance of India after encouragement from ballet star Anna Pavlova. Rukmini studied dance, and refined dance forms that had become degraded. She rechristened the so-called devadasi dance as bharatanatyam. Her first public performance was at the Diamond Jubilee Convention of the Theosophical Society in 1935. Her husband, George S. Arundale, was President of the Society. She wrote, "At the Diamond Jubilee Convention we had expected about two hundred people but two thousand turned up. There was so much excitement. More than anything, it totally changed people's prejudice towards the dance."[3] She continued: "Dr. Arundale himself thought at first it was a delightful hobby but when he saw me dance during that Diamond Jubilee Convention in 1935, he was greatly moved. He told me later it was a spiritual experience like a meditation."[4]

in January, 1936, the Arundales founded the International Center for Arts, which was later given the Indian name Kalākshetra. Rukmini Devi became President of the new school foundation, with James H. Cousins as Vice President, and George Arundale and C. Jinarājadāsa as "Patrons". At the inauguration, among those who spoke was Jinarājadāsa who said, "Today we are starting an organisation for the arts. It is surely a logical development of our work. Indeed this is a lovely event today, that in this Theosophical Society we have realised so fully the need of art. I hope the academy (Kalakshetra) will give us the inspiration we all need, so that we will understand better our work and better our ideals of Theosophy." At the Annual Convention of the Theosophical Society in 1940, George Arundale, then President, declared: "Today it is a humble cottage, this Kalakshetra, but in due course we shall have buildings, beautiful, simple structures created by our own hands, the Temple to India's glory. It is a cottage today; it will be a community tomorrow."

The arts center initially occupied space on the campus of the Theosophical Society, but Rukmini Devi sawth In 1945, Rukmini Devi began buying parcels of land in the village of Thiruvanmiyur. "Land was cheap, around Rs.300 per acre and over the years a great deal came to be acquired, though only in patches, when available. The institution we all see today and have in the last 60 years, stands on part of that patch."[5] In 1949, Theosophical Society President C. Jinarājadāsa came to feel that Kalakshetra was not quite compatible with the central focus of the Society. He asked Rukmini to move the school off the Adyar campus, which was accomplished by the middle of 1953.[6] 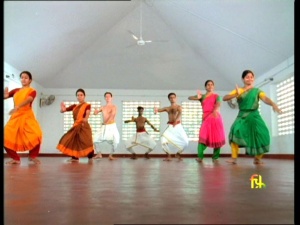 Radha Burnier, Rukmini's niece, was one of the first graduates of the school.

In January 1994, an Act of the Indian Parliament recognised the Kalakshetra Foundation as an Institute of National Importance.[7][8]

Rukmini Devi was the recipient of many honors and awards.