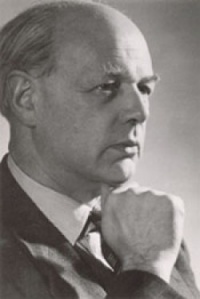 Dr. Laurence J. Bendit was an English Theosophist and psychiatrist who practiced in London, England. He is best known as a researcher, writer, and lecturer on parapsychology who worked in collaboration with his wife, clairvoyant Phoebe D. Bendit.

Laurence John Bendit was born in Marseille, France to Edmund Bendit and Emily Westerman.[1] His father was born in Bavaria, but emigrated first to England and then in 1879 to the United States where he became a naturalized citizen. He engaged in the import-export business "connected with American interests."[2] Laurence grew up speaking English, French, and German proficiently. He lived with his parents and younger brother in Marseille until 1909, when he was sent to England for schooling. In 1911 he attended the Bedales School, a coeducational prep school in Hampshire. He matriculated at Cambridge University, where he studied medicine and was awarded M.A. and M.D. degrees. After additional study, he received a diploma in psychological medicine.

In 1925, Laurence married Ethel May Impett in Leeds. That marriage seems to have ended in 1939. Dr. Bendit was a citizen of the United States until at least 1921, he did not visit there until much later in life. He may have become a British citizen with his marriage to Ethel, as records show that he lived and voted in England until the 1960s.

In 1923, Dr. Bendit established his medical practice in London with professional credentials including M.R.C.S. (Member of the Royal College of Surgeons) and L.R.C.P. (Licentiate, Royal College of Physicians). By 1931 he had been awarded the D.P.M. (diplomate in psychological medicine). He became a member of the British Psychiatric Society, and by the 1940s had established an office at a prestigious Harley Street address in London. He worked in Tavistock Clinic, Maudsley Hospital, and other psychiatric institutions.[3]

In 1943, Dr. Bendit's thesis "Paranormal Cognition: Its Place in Human Psychology" was accepted by the Faculty of Medicine of Cambridge University. The Society for Psychical Research observed in its journal:

We note with satisfaction the acceptance by the Faculty of Medicine at Cambridge University of a thesis by Dr. L. J. Bendit dealing with paranormal perceptions as occurring in psychopathological states. This appears to be the first doctorate in medicine that has been given, at any rate in this country, for a thesis embodying the findings of psychical research, and we may congratulate Dr Bendit on his successful presentation of the subject.[4]

In 1946, that work was published by Faber & Faber as Paranormal Cognition.

During the 1940s, Dr. Bendit and Phoebe Bendit were members of the Society for Psychical Research and participated in its meetings. On October 20, 1943 he presented a paper summarizing his thesis, "Paranormal Cognition: Its Place in Human Psychology."[5] Mrs. Bendit spoke on " Personal Impressions of Clairvoyance."[6] The SPR was pleased to have an eminent psychiatrist and a clairvoyant join its ranks, but some members were critical that the Bendits were too accepting of the existence of psychic phenomena. While the Bendits both embraced the scientific method in their work, they recognized that traditional means of measuring and observing psychism were inadequate and that methods had to be updated. They wrote this letter to the SPR:

We are comparatively new members of the Society. But for some years we have felt that a time must soon come when it would have to take stock of itself and its position in the scientific world. For, according to what it decides, it can either keep alive the pioneer spirit of its founders, who, despite the unpopularity of the subject, set to work and established psychical research on a scientific footing, or else it can become a kind of geological museum of dead facts, carefully docketed and labelled and locked away in cases—and as dreary as only a geological museum can be.

Recent events and correspondence seem to show that this time has come. The crux of the matter seems to be whether we are to be allowed to consider new ways of approach to the problems of the human psyche, which involve subjective experience, or whether we are to be compelled to stick closely to what its protagonists still believe to be the only scientific attitude, eliminating from our researches everything but objective assessment.

... science has changed, and nowhere more so than in the field of psychology, of which psychical research is a branch...

We joined the S.P.R. because we wanted to get to know about matters psychical in their relation to the mind in general. We imagine that in this we are not alone, and that the majority of the members, like ourselves, are more interested in the subject itself than in the question whether it is approached by one particular road or by another, or by many. And it would surely be wrong, as well as in the true sense unscientific, to allow ourselves to be tied down to an orthodoxy which is really outworn and outmoded. Granted that critical standards must be upheld: but there are many more ways than one of upholding these, and we sincerely trust that those responsible for the policy of the Society will insist on this eclecticism, and not allow it to be forced into a narrow dogmatic channel from which no departure is allowed.[7]

Journals such as Occult Observer and Psychic Science also took note of the Bendits' psychic observations.

Bendit met Phoebe Daphne Payne through a group of people who were studying clairvoyance, and they began to work together in 1937. After marrying in July, 1939, they lived in London. Until Phoebe's death in 1968, they collaborated in lecturing, teaching, and writing. She worked as a psychotherapist while he continued his psychiatric practice. They engaged in research taking advantage of her clairvoyant abilities in diagnosing medical and psychological conditions.

Both Bendits became popular speakers, appearing before Theosophical groups. In 1936, Dr. Bendit delivered an address "Justice for Individuality" at the Fourth World Congress of the internationalTheosophical Society, which took place in Geneva, Switzerland. In 1948 he delivered the Blavatsky Lecture on the subject Adam, the Prodigal Son. He was involved with the Theosophical Research Centre in London during the 1950s.

The Union Index of Theosophical Periodicals lists 154 articles with Dr. Bendit as author and 24 articles about him and his books. His articles were often translated into Theosophical journals in French, Spanish, Greek, and other languages.

He wrote a number of books, and many were in collaboration with his wife. They listed here in chronological order:

These audio recordings were made by the Theosophical Society in America from live lectures and radio broadcasts: