From Theosophy Wiki
(Redirected from MLB71)
Jump to: navigation, search 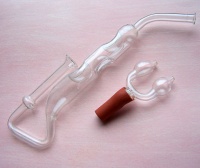 The reference to the "tobacco machine" that "has to be coolated" is unclear.