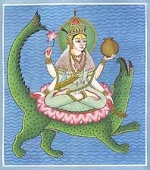 Makara (devanāgarī: मकर) is a Sanskrit name for a mythical sea-creature in Hinduism, which in early art seems to have been inspired in a crocodile. It is generally depicted as half terrestrial animal (in the frontal part in animal forms of elephant or crocodile or stag, or deer) and in the tail part as aquatic animal, (as a fish tail or also as seal). He is the vahana (vehicle) of the Ganga (the goddess of river Ganges) and the sea god Varuna. The makara appears in many myths, and is endowed with magical powers, especially those related to the fertility of rivers and the sea.

In the Hindu zodiac it represents the astrological sign of Capricorn.

The letter Ma is equivalent to number five and Kara means hand. Now in Samskrt Tribhuja means a triangle, bhuja or kara (both are synonymous) being understood to mean a side. So, Makara or Pañchakara means a Pentagon.[1]

H. P. Blavatsky adds to the statement above: "the five-pointed star or pentagon representing the five limbs of man" and in a footnote says: "What is the meaning and the reason of this figure? Because, Manas is the fifth principle, and because the pentagon is the symbol of Man—not only of the five-limbed, but rather of the thinking, conscious MAN".[2] Because of this, she connects the term to the Kumāras, who endowed human beings with mind:

But very few are those who know—even in India, unless they are initiated—the real mystic connection which seems to exist, as we are told, between the names Makara and Kumâra. The first means some amphibious animal called flippantly "crocodile", as some Orientalists think, and the second is the title of the great patrons of Yogins (See "Saiva Purânas") the Sons of, and even one with, Rudra (Siva); a Kumâra himself. It is through their connection with Man that the Kumâras are likewise connected with the Zodiac.[3]