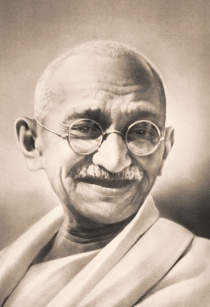 Involvement with the Theosophical Society 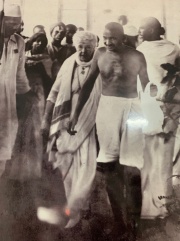 Both Gandhi and Theosophical Society President Annie Besant were key figures in the movement for Indian independence. While each advocated a different approach to disengagement from the British Empire, they had respect for each other.

In 1926, Theosophist Max Wardall reported on his visit to Gandhi in Ahmedabad. After a long description of the place and the "Indian Saint," Wardall asked questions related to the Theosophical Society:

Gandhi held beliefs that were consistent with tenets of Theosophy:

I do genuinely perceive that while everything around me is ever-changing, ever dying, there is, underlying all that change a living power that is changeless, that holds all together, that creates, dissolves, and recreates. That informing power of spirit is God, and since nothing else that I see, merely through the senses, can or will persist, He alone is. And if this power is benevolent or malevolent, I see it as purely benevolent, for I can see that in the midst of death, life persists. In the midst of untruth, truth persists. In the midst of darkness, light persists. Hence I aver that God is life, truth, light. He is love. He is the supreme good.[9]