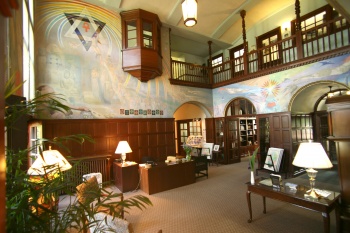 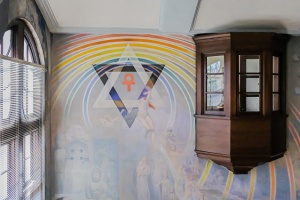 South wall from balcony opposite. Photo by Glenn Kujansuu, 2019.

Visitors entering the lobby of the L. W. Rogers Building at the headquarters of the Theosophical Society in America are surrounded by murals painted on all four sides of the lobby. The work was painted in 1931-1933 by Philadelphia artist Richard Blossom Farley. At the summer convention in 1930, members authorized the mural project that was proposed by arts patron Georgine Wetherill Shillard-Smith. Mr. Farley visited the headquarters and measured the space. He returned to his studio in Philadelphia where panels were painted, and then he spent several weeks in the Rogers Building while he applied the canvas panels to the walls.

Mr. Farley's ambition is to bring into one focus an impartial suggestion of all life, the past and the avenues that lead to the future, the mysteries that drive the onward multifold manifestations, from the atoms to the suns, the oneness of the endless flowers that bloom and fade on the tree of life, and

he believes that the graphic can suggest more than words, for into the million melting tones of color can be woven a fabric too complicated and yet too elemental for words.[1]

Philadelphian Georgine Shillard-Smith was a longtime member of the Theosophical Society based in Wheaton, Illinois. In 1927, work had been finished on a new headquarters building, and Mrs. Shillard-Smith had committed to see it "decorated." The architectural firm recommended waiting for two years before beginning that effort. She was well acquainted with Richard Blossom Farley and his art, and decided that he would be the ideal muralist for the project.

Late in 1929 she brought Blossom Farley from Philadelphia to the headquarters campus, which is known as "Olcott" since it was named in honor of TS Founder Colonel Henry Steel Olcott. By December the painter had measured the spaces in the reception hall and had completed some preliminary drawings. At the Society's summer convention of 1930 he displayed sketches to the membership, and the project was approved in a resolution at the annual meeting.[2] Members immediately subscribed to donate $1415 of the $2500 required for the murals. Mrs. Shillard-Smith led a fundraising campaign to raise the rest – no small feat during the Great Recession. Later that year Mrs. Shillard-Smith reported that he was hard at work in his studio. He painted in oils on canvas that had been cut to fit the spaces. She wrote: 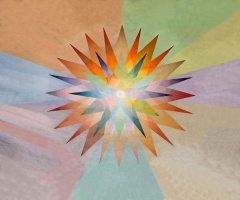 The artist visited for several weeks in 1931 and installed the first panels on the south wall. Mrs. Shillard-Smith wrote a descriptive article about the mural and the artist in September, 1931, entitled "Life Aspiring through the Ages."[4] The west wall was completed in April, 1933, and by November 2 the east and north panels had been installed. Blossom Farley gave a talk to the Olcott Lodge that day on the symbolism of the murals.[5]The staff and membership have been delighted with the murals ever since.

The west wall, which is broken into by two arches, is to have as a center the sun and earth, one carrying the sacred fire towards humanity and the other carrying the sword of destruction to the unfit, through the Reptilian Age. Trilobite and Dinosaur, the development of the single cell through the evolution of simple organisms, fishes and mammals, to man. The east wall, between the windows, will be the wall of the planets and stars. Snowflake forms, spores and pollen grains, as well as the Platonic solids, are used to fill up broken spaces, and give a consciousness of the continuity of circumambient life, never a vacuum, always polarities. The [north wall of the] reception room is to be decorated with flowers and leaf forms in a narrow frieze.[6]