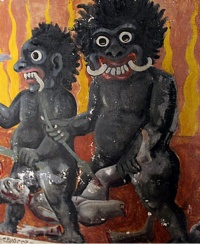 Traditional rendering of a Pishacha

Pishacha (Sanskrit: पिशाच piśāca, literally, "eater of raw flesh") are flesh-eating demons according to Indian mythology. Their origin is obscure, although some believe that they were created by Brahma. Another legend describes them as the sons of either Krodha (figuratively "Anger") or as Dakṣa’s daughter Piśāca. They are also said to be creatures of humanity’s vices, having the power to assume different forms at will. They feed on human energies and can possess human beings and alter their thoughts. The term is occasionally used in a more general way to include all the ghosts, goblins and vampires that haunt cemeteries and ruins in India.

In the Theosophical view the pisachas are known as "shells", that is, the Kāmarūpa plus the remnants of the fifth principle left behind in kāmaloka after the Ego entered in devachan.