School of the Open Gate 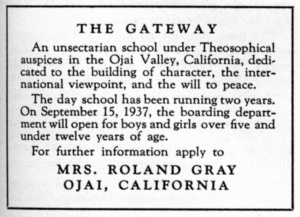 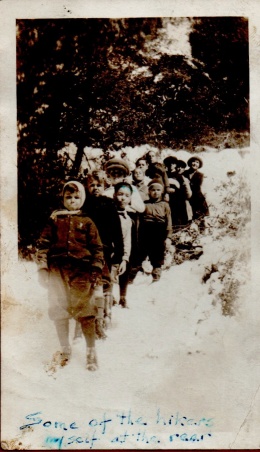 Julia K. Sommer and schoolchildren on Mt. Wilson in 1922

The School of the Open Gate was a Theosophical school near Krotona in Hollywood, California, founded in 1918 by Mary Gray of Boston.[1] In the General Report of the T. S. of that year it was introduced:

The School of the Open Gate is a new T. S. venture within a charming little hill-side glen almost adjoining Krotona. Here the Theosophical principles of education will be employed by a corps of teachers trained in the best modern methods. The faces of the children who have come from far and wide show a quality which makes any effort worth while on their behalf. The organization known as the Theosophical Fraternity in Education is growing throughout the Section and is engaged in spreading the ideals of Theosophical education where they will do the most good in American public educational systems.[2]

The Handbook of Private Schools described it as "a modern open air school of the Theosophical cult for children from kindergarten to high school."[3]

In 1919 the responsibility for the school was transferred to the Theosophical Fraternity in Education, based in Chicago. Bonds were offered for $25 at 7% interest to finance school land and buildings, and donations were requested for a scholarship fund.[4] By 1920 the school had enrolled fifty pupils. Four were in the boarding department, and plans were made to accommodate about 10-12 boarders.[5]

Eight o'clock in the morning and a merry crowd of children dressed as for a hike were waiting expectantly in front of the main building of the School of the Open Gate one sunny day. Why so early? Soon the school bus drove up and all piled in and were driven off toward the boulevard. "We're going to Mt. Wilson" they shouted to a passerby who looked questioningly at the past disappearing bus. Their answer explains the early start. And a tired but happy lot of children and teachers came back just before bedtime that night. Some of them had that day seen snow for the first time in this life. A few of the more hardy ones had climbed to the very top of the mountain and had seen the observatory. They had gained first hand information of much that hitherto had been mere book knowledge to them.

This is the educational theory according to which the work of the School of the Open Gate is carried on - to get the children into intimate touch with that which they are studying, to make the world and life a real and living experience to them. Later the students of Shakespeare in the more advanced grades formed a theatre party with several members of the faculty and attended Robert Mantell's presentation of "As You Like It."

The geography of nearby fields, canyons and hills; the arithmetic required to keep score in games, to carry on a store, to sell the vegetables raised by them in the school gardens; and that necessary in the school shops all help to make lessons vivid and lasting in their effect upon young minds.[6]

Among the children who attended the school were Grayson and Stanley Rogers, the sons of L. W. Rogers, and the sons of Col. Bustillo of the Cuban army.[7] On April 7, 1922, students demonstrated their Theosophical attitudes with a generous project:

On Friday, April 7th, some of the pupils of the School of the Open Gate, gave an original entertainment for the benefit of the Panchama Free Schools of India. None of the faculty had been asked for either suggestions or help, and it was a great surprise to all who attended, both for the beauty of the entertainment and the fine spirit of helpfulness that prompted it...