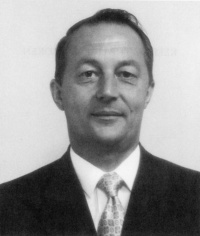 Ted Davy was General Secretary of The Theosophical Society in Canada from 1968-1986 and, together with his wife Doris, co-edited The Canadian Theosophist from 1961 to 1992.

Ted Davy was a young evacuee who was brought to Canada in September 1940 under the threats that the Germans would bomb and invade England during World War II. In Canada, while living in Halifax, Nova Scotia, Ted joined the Norwegian Merchant Navy when he was sixteen, and later the British Merchant Navy. He spent his early years as a sailor after the war. His experience on ships taught him a disciplined way of life.[1]

In 1955, Ted married Doris, and they enjoyed many decades together. They had no children. The couple had met through the Theosophical Society, and Doris gave this account:

I was first introduced to Ted at the Toronto Theosophical Society's Holly Bazaar in December of 1954.

We met again the following month when we both became active in an amateur dramatic group directed by a longtime Toronto Theosophist... we became engaged. Up until that time we had both been somewhat independent individuals but our coming together seemed to be a meeting of like minds and a feeling of having met before. We were married on a glorious Thanksgiving weekend in October with a few friends present and a fellow Theosophist held a reception of us in her home.

It was then back to our individual business careers in the city. In non business hours we were both active as members with the Toronto T.S. in various capacities and kept up our association with the dramatic. We were strolling players who visited hospitals, nursing and retirement homes – even a women's prison - to provide some entertainment and laughter. Every Easter we performed a play at the Toronto T.S. with a Theosophical theme and it was a pleasure to work in such a lovely auditorium with its fine acoustics that had seen so many well known Theosophical speakers on its platform over the years.[2] 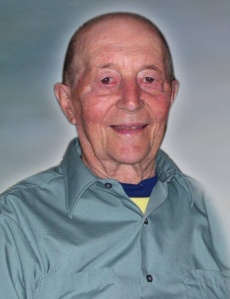 During the course of his business career, Mr. Davy held "management positions in Canadian trade associations."[3]

Mr. Davy engaged in a full range of activities within the Theosophical Society.

Editorship of The Canadian Theosophist

Doris wrote of the time in 1961 when she and Ted heard from Dudley Barr, who wished to reduce his workload in the Canadian Section,

He invited us to his home... to chat about the magazine. He was thinking of one person to replace his then assistant but we made it clear that we preferred to work as a team. He agreed and thereafter whenever he saw us together, or in correspondence, he addressed us as "Dorited."[6]

Dorited worked with Mr. Barr on the Mar/Apr 1961 issue of The Canadian Theosophist, then took over as editors of the magazine, continuing until 1992. They began incorporating visits to T.S. lodges into all of their vacations in Canada, the United States, and Europe, building relationships that served well in editing the periodical and in later leadership roles.

General Secretary of the Canadian Section

When he took office, membership was at a 40-year high of 399 members. In November, 1967, Section headquarters moved from 52 Isabella Street in Toronto to 310 Dupont Street, and Mr. Davy had a role in reorganizing the section's records in the course of that move.

The Canadian TS engaged in a very well-received program of placing all the major works of Helena Petrovna Blavatsky into 26 Canadian university libraries, including The Secret Doctrine, Isis Unveiled, H. P. Blavatsky Collected Writings, The Key to Theosophy, and The Voice of the Silence.[8]

Working with Joy Mills, President of the Theosophical Society in America (TSA), Mr. Davy organized a series of events - the North American Theosophical Students Conferences. The first was held at Niagara Falls in 1969, followed by conferences in Detroit, 1970; Toronto, 1971; and finally the the Olcott campus, Wheaton, Illinois, in 1972. Joy Mills regarded these events as preparation for the 1975 Centenary World Congress in New York City.[9] Mr. Davy spoke at the 1978 annual convention of the TSA and made presentations at TSA Summer Schools in 1980 and 1981. He also participated in the 1984 West Coast Conference, held at the Krotona Institute of Theosophy and the 1987 Conference on Dissemination of Theosophy in New York City, sponsored by the independent magazine ‘’Theosophical Sparks’’.

Mr. Davy was a popular lecturer who spoke on such diverse topics as Madame Blavatsky, Stonehenge, the Mysteries of Dionysis, and heroes of mythology. In 1982, after his retirement from the business world, he was invited to spend a month at Krotona School of Theosophy to present a series of talks. In 1983, Mr. Davy was asked to present the prestigious Blavatsky Lecture at the Theosophical Society in England. His topic was "The Descent into Hades". While in England he conducted a seminar at Tekels Park and delivered additional lectures.[10]

In 2004 colleagues honored Mr. Davy by publishing a festschrift, Keeping the Link Unbroken: Theosophical Studies Presented to Ted G. Davy on His Seventy-fifth Birthday. The editor was Michael Gomes. The idea for this volume arose during "The Works and Influence of H.P. Blavatsky Conference" in Edmonton in 1998. The essays presented are focused on history of the Theosophical movement.[11]

The Union Index of Theosophical Periodicals lists 212 articles by or about Mr. Davy in The Canadian Theosophist and several other other journals. Over 50 articles by Doris Davy are also listed.