The Divine Plan – Written in the Form of a Commentary on H. P. Blavatsky's Secret Doctrine – by Geoffrey A. Barborka – Expressly for the Purpose of Those Who Wish to Read and Gain a Deeper Understanding of “The Secret Doctrine” – Presenting an Exposition of the Doctrines of the Esoteric Philosophy Analysing and Explaining All the Terms Used was completed in 1958, and published in 1961 by The Theosophical Publishing House, Adyar.

The Divine Plan presents an exposition of the esoteric doctrines of Cosmogenesis from Volume I of The Secret Doctrine, analyzing and explaining all the terms used. It is a commentary especially helpful for those who are considering reading The Secret Doctrine by Madame Blavatsky, or those who simply wish to read and gain a deeper understanding of its study. It stands as a classic of Theosophical literature in its own right. 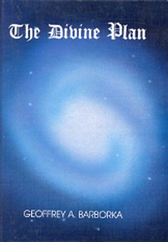 Without any doubt this is one of the most important Theosophical books to come out since 1888, for it contains within its 564 pages the potential to revivify even the most moribund lodge with the trenchant rationality of H.P.B. The Divine Plan is not, and was not designed to be, a substitute for The Secret Doctrine, but by separating the essentially philosophical elements of the latter from the polemical method which H.P.B. was forced to employ Mr. Barborka has created an invaluable outline of the original teachings of Theosophy.

In "an exposition of the doctrines of the esoteric philosophy analysing and explaining all the terms used" Mr. Barborka has revealed to us the grand logic of the philosophical system expounded in The Secret Doctrine. You will say that this is not news to any student worthy of the name. True. However, this book is unique in its clarity and its modus operandi. Mr. Barborka has made every single point in his exposition by direct quotation from the original edition of The Secret Doctrine, from The Voice of the Silence, from Isis Unveiled, from Five Years of Theosophy, from The Theosophical Glossary, from Transactions of the Blavatsky Lodge, from The Mahatma Letters to A.P. Sinnett, and from The Letters of H.P. Blavatsky to A.P. Sinnett. Mr. Barborka's triumph is that now for the first time the Theosophical Society is in possession of a concise, clear, scholarly, and fully documented outline of those fundamental propositions which it has been its mission to propagate, however modestly. To quote from the Preface:

It will very soon be apparent that in this work The Secret Doctrine is being considered by means of subjects - or rather by Doctrines. In this method the chapters are arranged in a sequence which leads the mind from one doctrine to the next in an interrelated pattern.

Mr. Barborka has achieved the seemingly impossible task of analysis and exposition while remembering the limitations of the common reader. As he points out:

In order to read The Secret Doctrine understandingly it is necessary to know: (1) the meaning of a term itself - in the case of Sanskrit, going to the root-meaning of the word is of great importance; (2) the manner in which the term is used in relation to the passage; (3) the meaning of the whole passage; (4) the relation of the passage to the doctrine as a whole; (5) whether the term of passage is used in a generalizing sense or specifically; (6) whether a symbolical meaning is being employed; (7) whether more than one interpretation is applicable.

By careful quotation from the source books mentioned above Mr. Barborka has succeeded admirably in his task of clarification. As well, Sanskrit terms are explained as they are used, in detail, and an effective key to pronunciation is found at the beginning of the volume. In addition, after each quotation from The Secret Doctrine is given the page and volume reference for not only the original edition but also for the Third and Revised Edition, published in two volumes in 1893, and the Adyar 6 volume editions.

Indeed, if Mr. Barborka had written no more than his "enumeration" of the eight divine laws he would still deserve the gratitude of everyone who has ever tried to explain to a stranger what the Theosophical Society is all about! Following this brief definition in the "Introductory", The Law of Periodicity, The Law of Adjustment, The Law of Essential Unity, The Law of Self-Unfoldment, The Law of Motion, The Septenary Law, The Law of Compassion, The Law of Coming into Being are all explored in depth in the book proper.

Surely, the author's purpose to aid students and lecturers has been amply fulfilled! There is no longer the slightest shadow of an excuse for rambling or vagueness on the Theosophical platform when everyone, no matter how pressed for time, has it within his power to be fully informed.[1]

Students of The Secret Doctrine have long wished for a definitive guidebook which would chart a patterned course through those amazing volumes, delineating clearly the geographical features of that vast continent of thought comprising the esoteric philosophy that H.P.B. explored. Such a guidebook is now at hand, and surely every lover ofThe Secret Doctrine must rejoice in this commentary by so able and devoted a student as Geoffrey A. Barborka. The idea for such a text, the author tells us, was born as a result of a symposium on "Methods of Approach to the Study of The Secret Doctrine, held during a Convention of the American Section. The title of the symposium is itself relevant to the present work, for Mr. Barborka's volume represents in the truest sense a "method of approach," and it is designed neither as a digest of H.P.B.'s stupendous work nor as a comprehensive survey of all that The Secret Doctrine contains. As a ready source of reference for the lecturer seeking pertinent passages on major concepts of the philosophy, as a guide-book for the student or class leader who is desirous of ordering his knowledge of the great occult principles of the original text, as an exposition of the fundamental principles of the wisdom for the newcomer to The Secret Doctrine who is searching for the Ariadne[2] thread of meaning that will lead him through the maze of information to the heart of truth, this present book stands unexcelled in recent theosophical literature and constitutes a major contribution to the Movement.

Commenting on the title of his book, Mr. Barborka states in the Preface: "This work is entitled The Divine Plan for the reason that the writer holds that The Secret Doctrine testifies to the existence of a Divine Plan. He has sought to convey the knowledge of it to you, the reader. It is only fair to state, however, that the full and complete exposition of The Secret Doctrine is only attainable by means of the 'seven keys' to its understanding. Since the seven keys were not provided in the volumes, the writer submits that he has attempted to present a guidebook towards their understanding, expressly for those who wish to read and study these ancient teachings."

Since the author asserts that the essential premise of the Esoteric Philosophy is the existence of a Plan, it is but a logical step to the assumption that this Plan "is a manifestation of Divine Law." The laws that emanate from the primal Law are "fundamental in scope . . . operative before the universe came into being . . . Since these laws continue to operate, regardless of the fact that a man, a planet, a sun, or even a universe may be in manifestation or non-manifestation, they are Divine Laws, because they are beyond the reach of space or time. . ." Mr. Barborka's approach to The Secret Doctrine is by means of a delineation of these laws, from which certain doctrines, exemplifying the operation of the laws, inevitably follow. Quite clearly, the author's thesis is that H.P.B.'s volumes may best be approached by a consideration of various subjects, and that a page-by-page reading will only lead the student, and particularly the newcomer to the work, into a state of confusion and often misinterpretation.

A mere recital of these vast themes which are here elucidated for our deeper study and meditation can never convey the majesty and sweep of the Divine Plan itself; it is only as we give ourselves wholeheartedly to the study, which is not to be approached with the mind alone but which demands the full focus of our nature, that we may come to the understanding of the Wisdom-Tradition, that the Secret Doctrine is revealed in that ultimate experience that makes of each of us the knower, as well as the lover, of Wisdom and therefore the per-ceiver of the truth of all things. Mr. Barborka suggests that a study of the doctrines associated with the great Laws whose operation is evidence of Plan may place us "en rapport with a great Continent of Thought, which represents the Wisdom of the ages — the heritage of the human race." To place our feet upon that Continent, however, is, figuratively speaking, a step each alone must take, but this is the supreme adventure upon which we may embark. Just so The Divine Plan is a guidebook for our explorations in The Secret Doctrine, leading the student to those volumes that he may himself discover the never-ending fascination of ail that they contain; it is not a substitute for, nor does the author ever indicate as much, those priceless volumes which stand pre-eminent in theosophical literature and indeed may be said to stand unparalleled in their implications for the course of western thought.

A unique feature of The Divine Plan is the unusual clarity with which all Sanskrit terms are explained in detail, not in a separate glos- sary, but at the time each term is met with in the text itself. The importance of the term and the value of the use of Sanskrit as a precise language is emphasized. Unique also is the in-dex, which serves the dual purpose of a general index to the book and a complete listing of all Sanskrit words and their verbal roots. In a preliminary chapter on "The Significance of Sanskrit Terms," aids in the pronunciation of these terms are given and a strong case is made for the necessity of mastering the meaning of the terms. These several features make Mr. Barborka's work invaluable to the student and the class leader, as well as to the general reader wishing to obtain a glimpse of what is contained within The Secret Doctrine.

A commentary, and the author has advisedly denominated his work just that, can only point a finger in a certain direction. Even the original source, upon which a commentary is based, can only inspire to a mode of walking, which is to say a way of life. It is action upon the wisdom gained that makes of our lives the living witness of the truth within; to borrow a phrase popularized by the Friends, it is the Spirit within, the Atman, that must "speak to our condition" and then only may we "speak to the condition" of the world about us. Referring to the immortal Wisdom which The Secret Doctrine transmits to the earnest seeker, Mr. Barborka has written: "May it help you as it has helped those who have contacted it and passed it on in their turn, so that your vision may be grander, your understanding more profound, in order that your life may be nobler, ever coming into closer harmony with the Divine Plan." His work, the fruition of a lifetime of study of H.P.B.'s writings, is a significant signpost on the road to the Wisdom, illuminating as it does the marvellous order which The Secret Doctrine portrays.[3]