The Herald of the Star (periodical) 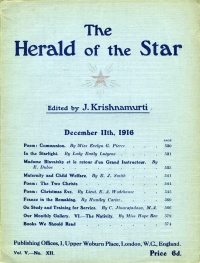 The Herald of the Star was the official organ of the Order of the Star in the East, which promoted the concept that Jiddu Krishnamurti was the Maitreya, or World Teacher. It was published in London monthly from January 12, 1912 to December 1927, with J. Krishnamurti serving as editor.

Availability of this periodical

Most issues of this periodical are available online at the IAPSOP database. Microfilm is not available, but several academic and public libraries have some issues. The Henry S. Olcott Memorial Library has a fairly complete run. Some articles were reprinted in other periodicals and books, such as Mary Gray's 1935 publication, The Gateway of Liberation, which was reprinted from 1924 issues of The Herald.[1] and Jinarajadasa's The Message of the Future.[2]