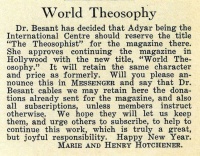 World Theosophy was a journal published in Hollywood, California from January, 1931 to December,1933. The editors were Marie Russak Hotchener and Henry Hotchener, who were affiliated with the Theosophical Society based in Adyar, India. Marie Hotchener had edited The Theosophist in Hollywood for the year of 1930, but at the end of that year, TS President Annie Besant decided to bring that periodical back to Adyar, and gave permission for the Hotcheners to produce World Theosophy as a separate magazine.[1]

No issues of World Theosophy seem to be available in digital formats.