The Astral Plane is a non-physical dimension of existence postulated by classical (particularly neo-Platonic), medieval, oriental and esoteric philosophies and mystery religions. This sphere is made of astral matter, a subtle form of matter which is said to be translucent and radiant.

H. P. Blavatsky defined it as the plane immediately higher to the physical in degree of subtlety. This is the plane on which dreams take place. Most people are aware to some extent on this plane, though little remembrance is kept in the physical brain. Clairvoyants are able to integrate the astral consciousness into their waking state. This plane, however, is regarded as misleading and therefore dangerous, especially for those who are not regularly trained to interpret correctly what they perceive.

Later teachers in the Adyar tradition such as Annie Besant and C. W. Leadbeater had a somewhat different view of the astral plane (also called by them "Emotional Plane"), which seems to be a combination of the second and third planes in Mme. Blavatsky's teachings. 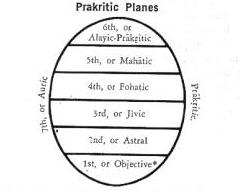 Mme. Blavatsky regards the astral plane as the second (counting from below up), the one that is immediately above the objective or physical, whether on the macrocosmic or microcosmic world. Normal human beings are aware on it when asleep:

The instinctual mind finds expression through the cerebellum, and is also that of the animals. With man during sleep the functions of the cerebrum cease, and the cerebellum carries him on to the Astral plane, a still more unreal state than even the waking plane of illusion; for so we call this state which the majority of you think so real.[1]

Sensitives, mediums, and clairvoyants can perceive this plane in their waking or "objective" consciousness. However, the nature of this plane is regarded to be illusory and deceptive:

The Astral plane is still more deceptive [than the phsyical], because it reflects indiscriminately the good and the bad, and is so chaotic.[2]

That which mediums see, hear, and sense, is "real" but untrue; it is either gathered from the astral plane, so deceptive in its vibrations and suggestions, or from pure hallucinations, which have no actual existence, but for him who perceives them.[3]

The first of the prakritic planes is called "Objective Prakritic" or "Terrestrial". It is divided into seven sub-planes, and the second is the astral (objective) plane. This is an "instinctual plane" for those beings that are limited to it, whether by nature or accident:

Astral Instinctual Consciousness. The consciousness of sensitive plants, of ants, spiders, and some night-flies (Indian), but not of bees. . . . On this plane is the consciousness of idiots. The common phrase, “he has lost his mind,” is an occult truth; for when, through fright or other cause, the lower mind becomes paralyzed, then the consciousness acts on the astral plane. The study of lunacy will throw much light on this point. This may well be called the “nerve plane.” It is cognized by our “nervous senses,” of which, as yet, modern physiology knows nothing. Hence it is that a clairvoyant can read with the eyes bandaged, with the tips of the fingers, the pit of the stomach, etc. This consciousness is greatly developed in the deaf and dumb. On this plane everything is reversed, reflected upside down.[4] 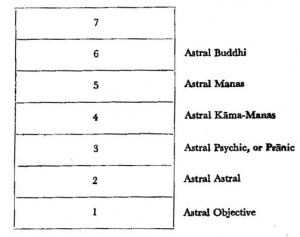 The second of the prakritic planes is called astral prakritic, and it presents seven degrees (or sub-planes) of consciousness. Mme. Blavatsky described them as follows:

2. Astral Consciousness. This second division corresponds to the second of the lower plane, but the objects here seen are of extreme tenuity, astralized astrals, so to say. This plane is the limit of the vision of the ordinary medium. To reach it a non-mediumistic person must be asleep, or in a trance, or under the influence of laughing-gas, or of some drug. In ordinary delirium the consciousness passes on to this plane.

3. Kâma-Prânic Consciousness. This state is of an intensely vivid nature. The consciousness is on it in the delirium of high fever. In delirium tremens the drunkard passes to this plane, and may even go on to the next. Lunatics also are often in this state of consciousness, and see most terrible visions. This plane overlaps the next, the Kâma-Mânasic Consciousness.

4. Kâma-Mânasic Consciousness. This is the worst of the Astral planes, Kâmic and terrible. Hence come the images that tempt: images of drunkards and libertines in Kâma-Loka, impelling their victims to drink and wanton; images of every lust and vice, inoculating men with the desire to commit crimes. People of weak and mediumistic natures imitate these images in a kind of monkeyish fashion, and so fall beneath their influence. Here are strewed the seeds of epidemics of vice, of cycles of disasters, and general catastrophes of all kinds that happen in groups––a series of murders, of earthquakes, of shipwrecks. In the most acute cases of delirium tremens the consciousness of the sufferer is on this plane.

5. Mânasic Consciousness. This plane is that of premonitions in dreams, of reflections from the lower mentality, of glimpses into the past and future, the plane of things mental and not spiritual.

6. Buddhic Consciousness. From this plane come all beautiful inspirations of art, poetry, and music, high types of dreams, flashes of genius. Here may be caught glimpses of past incarnations, although it may not be possible to locate or analyze them.

7. Auric Consciousness. The consciousness is on this plane at the moment of death, or in exceptional visions. Here is the consciousness of the drowning man when he remembers all the past incidents of his life in a flash. The memory of this consciousness must be stored in the heart, “the seat of Buddhi.” Then it will remain there, but impressions from this Âtmic plane cannot be made on the physical brain.[5]

According to Besant and Leadbeater

Annie Besant and C. W. Leadbeater described the planes in a somewhat different way from Mme. Blavatsky's presentation. The astral plane in these teachings is the Emotional Plane, where the Ego experiences dreams, and on which the consciousness of the deceased person dwells immediately after physical death.