From Theosophy Wiki
(Redirected from Bennett)
Jump to: navigation, search 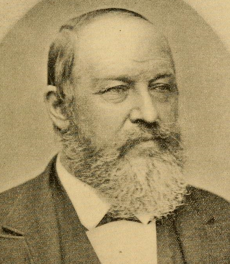 DeRobigne Mortimer Bennett (December 23, 1818 – December 6, 1882) was the founder and publisher of The Truth Seeker, an American periodical that espoused Free Thought and reform. Bennett was a devout Shaker for 13 years before evolving into a "freethinker," and on January 14, 1882, became a member of the Theosophical Society.

Bennett, D. M., an American freethinker and editor of The Truthseeker, who was framed by his enemies and jailed. After his release, his supporters sent him on a world tour, during which he visited the Founders at Bombay. APS took a dislike to him because of his somewhat uncouth appearance and was reproved by the Mahatmas. See ML index; ODL 2:328; D, p. 521, SH, pp. 165-6; HPB X: 141.[1]

He founded The Truth Seeker newspaper on September 1, 1873.[2] Its stated purpose was:

The Mahatmas on D. M. Bennett

Mme. Blavatsky wrote that when Mr. Bennett applied to become a member of the Theosophical Society she sought the advise of the Mahatmas:

Advice was indeed asked as to Mr. Bennett’s admission, simply because we foresaw what has since happened, that whatever odium his bigoted persecutors had contrived to cast upon him would have to be shared by us, and this seemed an impolitic step for our young Society to take. The result of that appeal is above stated by Mr. Bennett; who adds that the “response was that I am an honest, industrious man, and fully worthy to become a member . . . I hope their opinion is well founded.” It was so, as we have become more and more satisfied ever since, and now none regret him more than his cautious friends of Bombay—now of Madras.[4]

Mr. Bennett was working for the Masters' cause, although he was not aware of that. In a letter Djual Khool wrote to Alfred Percy Sinnett, under the directions of Mahatma K. H., it is stated:

I am also to tell you that in a certain Mr. Bennett of America who will shortly arrive at Bombay, you may recognise one, who, in spite of his national provincialism, that you so detest, and his too infidelistic bias, is one of our agents (unknown to himself) to carry out the scheme for the enfranchisement of Western thoughts from superstitious creeds. If you can see your way towards giving him a correct idea of the actual present and potential future state of Asiatic but more particularly of Indian thought, it will be gratifying to my Master.[5]

It seems that Mr. Sinnett met Mr. Bennett and did not like his appearance, to which Mahatma M. commented:

You saw only that Bennett had unwashed hands, uncleaned nails and used coarse language and had — to you — a generally unsavoury aspect. But if that sort of thing is your criterion of moral excellence or potential power, how many adepts or wonder producing lamas would pass your muster? This is part of your blindness. Were he to die this minute — and I'll use a Christian phraseology to make you comprehend me the better — few hotter tears would drop from the eye of the recording Angel of Death over other such ill-used men, as the tear Bennett would receive for his share. Few men have suffered — and unjustly suffered — as he has; and as few have a more kind, unselfish and truthful a heart. That's all: and the unwashed Bennett is morally as far superior to the gentlemanly Hume as you are superior to your Bearer.
What H.P.B. repeated to you is correct: "the natives do not see Bennett's coarseness and K.H. is also a native." What did I mean? Why — simply that our Buddha-like friend can see thro' the varnish, the grain of the wood beneath and inside the slimy, stinking oyster — the "priceless pearl within!" B---- is an honest man and of a sincere heart, besides being one of tremendous moral courage and a martyr to boot. Such our K.H. loves — whereas he would have only scorn for a Chesterfield and a Grandison. I suppose that the stooping of the finished "gentleman" K.H., to the coarse fibred infidel Bennett is no more surprising than the alleged stooping of the "gentleman" Jesus to the prostitute Magdalene: There's a moral smell as well as a physical one good friend.[6]