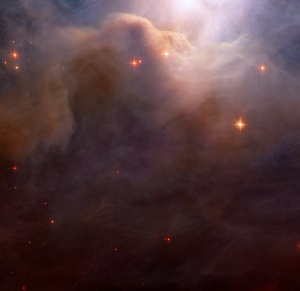 Cosmic Matter is a Theosophical term for the first differentiation of space or pre-cosmic substance. Mahatma K.H. defined it as "the imaginary materia prima itself one of the manifestations (6th principle) of the one element."[1] This one element "not only fills space and is space, but interpenetrates every atom of cosmic matter."[2]

The first differentiation of the pre-cosmic substance produces the homogeneous primordial matter:

That Spirit—call it the “Spirit of God” or Primordial Substance—mirrors itself in the Waters of Space— or the still undifferentiated matter of the future Universe —and produces thereby the first flutter of differentiation in the homogeneity of primordial matter.[3]

Prakriti is cosmic matter, out of which all visible forms are produced; and Akasha that same cosmic matter—but still more imponderable, its spirit, as it were, “Prakriti” being the body or substance, and Akasha-Shakti its soul or energy.[5]

Finally, on the physical plane, this cosmic matter, referred to as the "curds" in The Secret Doctrine, is the origin of the “Milky Way”, the matter we know:

The curds are the first differentiation, and probably refer also to that cosmic matter which is supposed to be the origin of the “Milky Way” — the matter we know. This “matter,” which, according to the revelation received from the primeval Dhyani-Buddhas, is, during the periodical sleep of the Universe, of the ultimate tenuity conceivable to the eye of the perfect Bodhisatva — this matter, radical and cool, becomes, at the first reawakening of cosmic motion, scattered through Space; appearing, when seen from the Earth, in clusters and lumps, like curds in thin milk. These are the seeds of the future worlds, the “Star-stuff.”[6]

In the Theosophical view, the cosmic matter is eternal[7] and during the maha-pralaya it reverts to the state of pre-cosmic substance.