From Theosophy Wiki
(Redirected from Kumāras)
Jump to: navigation, search 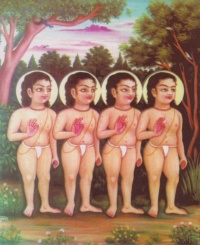 Kumara (devanāgarī: कुमार kumāra) is a Sanskrit term that refers to a virgin boy, or young celibate. In Hindu mythology it refers to the first four beings created by Brahmā at the beginning of the process of creation from his own mind. The four Kumāras are thus described as the first mind-born sons. Although they were expected to help in the process of creation, they refuse to procreate and instead devote themselves to celibacy and worshipping God. They are said to wander throughout the universe without any desire but with purpose to teach.

In the Theosophical view, the Kumāra is a hierarchy of celestial beings which, as any other hierarchy, involves entities of different degrees of evolution, from Dhyan-Chohans to the reincarnating Egos of human beings.

H. P. Blavatsky wrote in her The Theosophical Glossary:

The first Kumâras are the seven sons of Brahmâ, born out of the limbs of the god, in the so-called ninth creation. It is stated that the name was given to them owing to their formal refusal to “procreate their species”, and so they “remained Yogis”, as the legend says.[1]

The Kumaras, for instance, are called the “Four” though in reality seven in number, because Sanaka, Sananda, Sanatana and Sanat-Kumara are the chief Vaidhâtra (their patronymic name), as they spring from the “four-fold mystery.”[3]

The Exoteric four are: Sanât-Kumâra, Sananda, Sanaka, and Sanatana; and the esoteric three are: Sana, Kapila, and Sanatsujâta.[4]

The hierarchy of the Kumāra include different beings. The highest Kumāras are the "eternal celibates" who do not belong to this plane. They are on Janarloka, beyond the solar system.[5] On this spiritual sphere dwells Sanat-Kumâra.[6] Corresponding with this loka, on a lower plane, is Sutala, where dwell the Kumāra-Agnishvāttas. This sphere corresponds on Earth with the Higher Manas, the "Kumāra-Egos".[7]

One of the ways in which this term is used is to refer to fifth Order of celestial beings:

They are the fifth order of Brahmadevas, and the five-fold Chohans, having the soul of the five elements in them, Water and Ether predominating, and therefore their symbols were both aquatic and fiery.[8]

These are said to have refused to participate in the "creation" man. This rejection, however, was only during the process of producing the physical aspect of human beings. Mme. Blavatsky quotes the Vishnu Purana that says the Kumāras were: "Without desire or passion, inspired with holy wisdom, estranged from the Universe, and undesirous of progeny". She adds that "The period of these Kumâras is pre-Adamic, i.e., before the separation of sexes, and before humanity had received the creative, or sacred, fire of Prometheus".[9]

The Kumāras, being too spiritual to produce physical entities, are said to have refused to create the physical humanity:

The Agnishwatta, devoid of the grosser creative fire, hence unable to create physical man, having no double, or astral body, to project, since they were without any form, are shown in exoteric allegories as Yogis, Kumaras (chaste youths), who became “rebels,” Asuras. . .[10]

Therefore they were not involved in the development of the physical aspect of human beings that took place during the first three and a half Rounds of our Planetary Chain. They began their work in the fourth Round:

“The Kumâras,” explains an esoteric text, “are the Dhyanis, derived immediately from the supreme Principle, who reappear in the Vaivasvata Manu period, for the progress of mankind.” [Footnote]: They may indeed mark a “special” or extra creation, since it is they who, by incarnating themselves within the senseless human shells of the two first Root-races, and a great portion of the Third Root-race—create, so to speak, a new race: that of thinking, self-conscious and divine men.[11]

In the esoteric teaching, they are the progenitors of the true spiritual SELF in the physical man.[12]

The Kumâras [are] those “who refused to create,” but who were compelled later on to complete divine Man by incarnating in him.[13]

If the Kumaras had started their work before the lower principles of human beings had been fully mature, humanity would have remained in a passive spiritual state:

After the Earth had been made ready by the lower and more material powers, and its three Kingdoms fairly started on their way to be “fruitful and multiply,” the higher powers, the Archangels or Dhyanis, were compelled by the evolutionary Law to descend on Earth, in order to construct the crown of its evolution—MAN. Thus the “Self-created” and the “Self-existent” projected their pale shadows; but group the Third, the Fire-Angels, rebelled and refused to join their Fellow Devas.

Hindu exotericism represents them all as Yogins, whose piety inspired them to refuse creating, as they desired to remain eternally Kumâras, “Virgin Youths,” in order to, if possible, anticipate their fellows in progress towards Nirvana—the final liberation. But, agreeably to esoteric interpretation, it was a self-sacrifice for the benefit of mankind. The “Rebels” would not create will-less irresponsible men, as the “obedient” angels did; nor could they endow human beings with only the temporary reflections of their own attributes; for even the latter, belonging to another and a so-much higher plane of consciousness, would leave man still irresponsible, hence interfere with any possibility of a higher progress. No spiritual and psychic evolution is possible on earth—the lowest and most material plane—for one who on that plane, at all events, is inherently perfect and cannot accumulate either merit or demerit. Man remaining the pale shadow of the inert, immutable, and motionless perfection, the one negative and passive attribute of the real I am that I am, would have been doomed to pass through life on earth as in a heavy dreamless sleep; hence a failure on this plane.


Of all the seven great divisions of Dhyan-Chohans, or Devas, there is none with which humanity is more concerned than with the Kumâras. Imprudent are the Christian Theologians who have degraded them into fallen Angels.[14]

H. P. Blavatskty relates the hierarchy of the Kumaras with the Planetary Spirits that incarnate at the beginning of important cycles:

The truths revealed to man by the “Planetary Spirits” (the highest Kumâras, those who incarnate no longer in the universe during this Mahâmanvantara), who appear on earth as Avatâras only at the beginning of every new human race, and at the junction or close of the two ends of the small and great cycle.[15]

But there are also some Kumara-Agnishvattas that incarnated in human beings in the third Root-Race:

. . .the four classes of the originally arupa gods—the Kumâras, the Rudras, the Asuras, etc.: who are also said to have incarnated. They are not the Prajâpatis . . . but their informing principles—some of which have incarnated in men, while others have made other men simply the vehicles of their reflections".[16]

In the days of Lemuria, the Dioscuri, the “Egg-born,” were the Seven Dhyan Chohans (Agnishwatta-Kumâra) who incarnated in the Seven Elect of the Third Race.[17]

These Kumaras became the "germ" of the great Brotherhood of Adepts:

Alone a handful of primitive men—in whom the spark of divine Wisdom burnt bright, and only strengthened in its intensity as it got dimmer and dimmer with every age in those who turned it to bad purposes—remained the elect custodians of the Mysteries revealed to mankind by the divine Teachers. There were those among them, who remained in their Kumâric condition from the beginning; and tradition whispers, what the secret teachings affirm, namely, that these Elect were the germ of a Hierarchy which never died since that period:—

“The inner man of the first * * * only changes his body from time to time; he is ever the same, knowing neither rest nor Nirvana, spurning Devachan and remaining constantly on Earth for the salvation of mankind. . . . .” “Out of the seven virgin-men (Kumâra) four sacrificed themselves for the sins of the world and the instruction of the ignorant, to remain till the end of the present Manvantara. Though unseen, they are ever present. When people say of one of them, “He is dead”; behold, he is alive! and under another form. These are the Head, the Heart, the Soul, and the Seed of undying knowledge (Gnyana). Thou shalt never speak, O Lanoo, of these great ones (Maha . . . ) before a multitude, mentioning them by their names. The wise alone will understand.” . . . (Catechism of the inner Schools.)


It is these sacred “Four” who have been allegorized and symbolized in the “Linga Purâna,” which states that Vamadeva (Siva) as Kumâra is reborn in each Kalpa (Race in this instance), as four youths—four, white; four, red; four, yellow; and four, dark or brown.[18]

In another instance, talking about a temple in Carnac on the south coast of Brittany (France), she wrote: "It was built by the prehistoric hierophant-priests of the Solar Dragon, or symbolized Wisdom (the Solar Kumâras who incarnated being the highest)".[19]

The word "Kumara" is sometimes used to refer to the Higher Egos (sometimes called "Kumāra-Egos") before they incarnated in the animal-man of the third Root-Race in the Fourth Round:

As given out in The Secret Doctrine, the Egos or Kumâras, incarnating in man, at the end of the Third Root-Race, are not human Egos of this earth or plane, but became such only from the moment they ensouled the animal man, thus endowing him with his Higher Mind. They are “Breaths” or Principles, called the Human Soul, or Manas, the Mind. As the teachings say: "Each is a Pillar of Light. Having chosen its vehicle, it expanded, surrounding with an Âkâsic Aura the human animal, while the Divine (Mânasic) Principle, settled within that human form".[20]

Manas is, as it were, a globe of pure, Divine Light, a Ray from the World Soul, a unit from a higher sphere, in which is no differentiation. . . . The globe of Divine Light, a Kumâra on its own plane, is the Higher Ego, or Higher Manas.[21]