In the Theosophical view the moon is regarded as a dead planet that was inhabited in the past. The moon belongs to the previous Planetary Chain from which the earth derives.

Mother of the Earth

The Earth Chain of seven globes as thus defined is the direct reincarnation of a former chain of seven globes, and that former family of seven was the moon chain, the moon itself being the visible representative of the fourth globe of the old chain. When that former vast entity composed of the Moon and six others, all united in one mass, reached its limit of life it died just as any being dies. Each one of the seven sent its energies into space and gave similar life or vibration to cosmic dust — matter, — and the total cohesive force of the whole kept the seven energies together.[1] 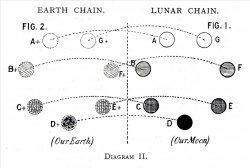 Mme. Blavatsky explained the process in the following way:

In the Seventh Round on the Lunar chain, when Class 7 [of Monads], the last, quits Globe A, that Globe, instead of falling asleep, as it had done in previous Rounds, begins to die (to go into its planetary pralaya); and in dying it transfers successively, as just said, its “principles,” or life-elements and energy, etc., one after the other to a new “laya-centre,” which commences the formation of Globe A of the Earth Chain. A similar process takes place for each of the Globes of the “lunar chain” one after the other, each forming a fresh Globe of the “earth-chain.” Our Moon was the fourth Globe of the series, and was on the same plane of perception as our Earth. But Globe A of the lunar chain is not fully “dead” till the first Monads of the first class have passed from Globe G or Z, the last of the “lunar chain,” into the Nirvana which awaits them between the two chains; and similarly for all the other Globes as stated, each giving birth to the corresponding globe of the “earth-chain.”[2]

Its influence on Earth

The moon is in a process of disintegration and, as Mme. Blavatsky wrote: "before the latter [the earth] reaches her seventh Round, her mother Moon will have dissolved into thin air".[3] Being a dead body, its influence on earth is regarded as harmful for the most part:

The Moon is now the cold residual quantity, the shadow dragged after the new body, into which her living powers and “principles” are transfused. She now is doomed for long ages to be ever pursuing the Earth, to be attracted by and to attract her progeny. Constantly vampirised by her child, she revenges herself on it by soaking it through and through with the nefarious, invisible, and poisoned influence which emanates from the occult side of her nature. For she is a dead, yet a living body. The particles of her decaying corpse are full of active and destructive life, although the body which they had formed is soulless and lifeless. Therefore its emanations are at the same time beneficent and maleficent—this circumstance finding its parallel on earth in the fact that the grass and plants are nowhere more juicy and thriving than on the graves; while at the same time it is the graveyard or corpse-emanations, which kill. And like all ghouls or vampires, the moon is the friend of the sorcerers and the foe of the unwary. From the archaic æons and the later times of the witches of Thessaly, down to some of the present tantrikas of Bengal, her nature and properties were known to every Occultist, but have remained a closed book for physicists.[4]

Both Blavatsky and the Mahatmas mentioned the moon in connection to what is called the "Eighth Sphere,"[5] although the connection is not clear.

C. W. Leadbeater also identified the moon with this sphere.[6]