Difference between revisions of "Universal Invocation"

The Universal Invocation, also known as Universal Prayer, was written in 1923 by Dr. Annie Besant, then president of the Theosophical Society (Adyar). It reads:

O Hidden Life, vibrant in every atom;
O Hidden Light, shining in every creature;
O Hidden Love, embracing all in Oneness;
May all who feel themselves as one with Thee,
Know they are therefore one with every other. 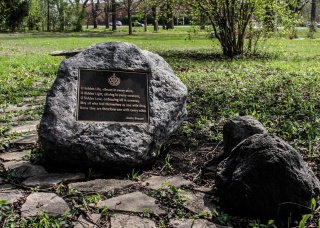 The verse is recited every international convention of the Theosophical Society in Adyar in the ceremony of reciting the Prayers of the the Religions, beginning in 1925,[1] and daily at many theosophical centers around the world.

"O Hidden Life" is quoted on a plaque in the Garden of Remembrance on the Olcott campus of the Theosophical Society in America.

In the 1930 Lodge Procedure Book of the American Theosophical Society, the final two lines varied, and were followed by an additional line:

May each, who feels himself as one with Thee,
Know he is therefore one with every other.
Let us go forth to sound the note of harmony in the discords of the world.[2]

The Scout Movement in Madras [Chennai] adopted the invocation with another variation:

May each, who feels himself as one with Thee,
Know he is therefore one with every other.

Mrs. Besant felt that "this word 'therefore' implied certain Theosophical spiritual beliefs and she did not desire to impose such a heavy obligation on the Scouts and so changed the word 'therefore' to 'also'.[3]

The words were set to music at least twice, by Charles Elliott Fouser and by J. Eleanor Stakesby-Lewis of South Africa,[4] and another member, W. H. Perrins, proposed yet another version.[5]