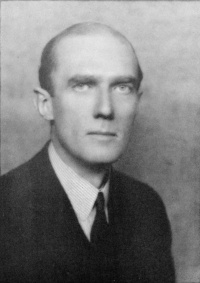 A. Trevor Barker was born at Las Palmas in the Canary Islands, on October 10, 1893. Barker was well educated, and referred to as "Dr." but nothing is known about his education. He married Virginia, also an active Theosophist, with whom he had four children.

On July 30, 1930, he joined the Point Loma society, soon becoming the President of its English Section for a number of years.[1] It was Dr. Barker who suggested London as the place to hold the commemoration of the hundredth anniversary of H. P. Blavatsky's birth that Gottfried de Purucker was planning. On June 24, 1931, Dr. Barker chaired the Centennial Conference, which was well attended by leading representatives of the principal Theosophical Societies.

Dr. Barker was also editor of The English Theosophical Forum. He participated in an international project to publish The Complete Works of H. P. Blavatsky, and is nominally the editor of Volume I.

Barker's most important contribution was the transcription, compilation, and publication of the The Mahatma Letters to A. P. Sinnett. Mr. Sinnett, recipient of many letters from the Masters known as Koot Hoomi and Morya, had died in 1921. His correspondence with the Mahatmas and with Helena Petrovna Blavatsky passed on to Maud Hoffman, who had tended him with a daughter's devotion during his last illness.[2]

Just what prompted Trevor Barker to contact Maud Hoffman, executrix of the estate of the late A. P. Sinnett who had died in 1921, is not known. It is of record that the Mahatma as well as the Blavatsky letters had been bequeathed by Mr. Sinnett "solely and unconditionally" to Miss Hoffman, and that she in turn had allowed this young man the "great privilege of undertaking the whole responsibility" for their transcription and publication in book form.[3]

It is on record that Dr. Barker and Maud Hoffman were co-students of P. D. Ouspensky in 1921,[4] which could explain how he obtained her permission and support to transcribe these letters and publish them in book form.

One of Trevor's last actions was arranging for the depositing of the originals of the The Mahatma Letters to A. P. Sinnett in the British Museum, in the Department of Select Manuscripts.[5]

A. P. Sinnett's legatee, Maud Hoffman, and Dr. Barker knew each other by 1921. According to James Moore they both became pupils of P. D. Ouspensky at 38 Warwick Gardens, Kensington, during the autumn of that year. In the autumn of 1922 they became residential pupils at Gurdjieff's Institute for the Harmonious Development of Man, at Fontainebleau-Avon. There, Dr. Barker was part of a small group that included Ouspensky's and Gurdjieff's wives.[6]

All during that time Trevor was a very ill man, and his illness particularly taking the form of deep depression and excessive fatigue. . . .[7]

Owing to the very trying circumstances in England, Mrs. Virginia Barker and the four children left the country in the fall of 1940 and went to the USA, to the state of Washington.[8]

With the death of A. Trevor Barker on July 17th of this year, the spontaneous wish was expressed by his many friends all over the world that his lectures and writings might be gathered together for publication in some permanent form. The present work, THE HILL OF DISCERNMENT, is an answer to this widespread desire. It contains in large part all the available addresses given in various parts of England, mainly to Theosophical groups and lodges, to European Conventions of the Theosophical Society, and to various 'fraternization' meetings with the Phoenix Lodge and other Lodges of the Adyar T. S. in England. [9]

In addition to his editorial work, Dr. Barker wrote for his Theosophical audience.

The Union Index of Theosophical Periodicals lists over 100 articles by or about Dr. Barker. The Theosophy World website offers 25 articles, and here are other digital resources: