The Adyar Library and Research Centre is a private research library at the headquarters of the Theosophical Society based in Adyar, Chennai, India. It was founded in 1886 by Henry Steel Olcott to provide members by providing the means of studying "all of the world's choicest systems of thought."[1] According to its website,

The Adyar Library and Research Centre was founded in 1886 by Colonel Olcott with a small but valuable collection of the Founders' books. Originally situated in the Headquarters building, it was shifted in 1968 to a more spacious one, better suited to its growing needs. It has always been one of the important aspects of the work at Adyar, both for members and for the public; 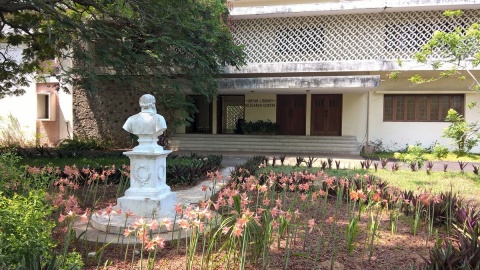 Adyar Library in 2017
moreover, today it is one of the well known oriental libraries in the world, dedicated to research and publication in the field of eastern civilization, philosophy and religion.[2] 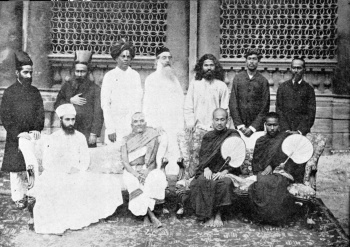 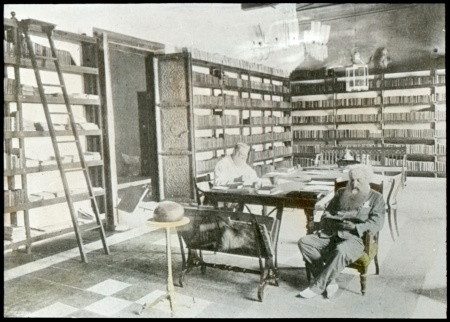 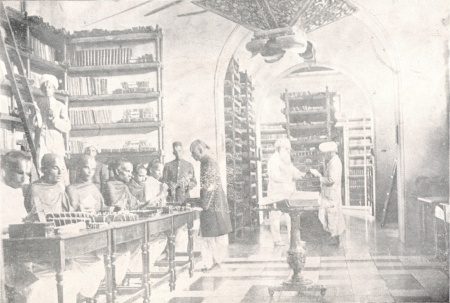 The original library was dedicated on December 28, 1886 by Colonel Olcott, based on a collection of volumes belonging to him and Madame Blavatsky. He expressed "perfect confidence in the future of the Library they were about to found: the ramifications of the Society were so wide, and the Asiatic members had such easy access to old books and manuscripts, that in time our collection must become large and unique. It would be a labor of love with the members as well as one of pride."[3] When the Library opened, it had already accumulated several thousand volumes and 3,000 manuscripts. "By the end of 1887, the number had increased to 12,000 volumes and 3,700 Manuscripts."[4]

Clara Codd described how the library was in 1910-1911, in its location in the Headquarters Building:

The ground floor also comprised the magnificent library, the Sanscrit part being one of the best in the world. A learned German scholar, Dr. Schraader, was then its custodian, and he was assisted by a Dutch journalist, Johann van Manen, who could speak several languages, among them Thibetan.[5]

In the Library one could see many objects of interest. The Sanscrit department of the Library did not look like a library to our eyes. It consisted of racks filled with palm leaf books with bamboo covers. On each leaf was painted in Sanscrit [sic] characters one shloka or verse. Mr. van Manen had procured many of these, going as far as Thibet after some priceless manuscript. Many of them were being copied and as one entered the library the sound of a monotonous chanting was heard, for the Devanagari must be chanted not spoken. One pundit would chant and the others would paint it down.[6]

Over the years, the library has drawn workers from many nations. For example, in 1956, three Americans, all formerly members of the Theosophical Society in America headquarters staff, were working in the Library. Ann Kerr was serving as Director [pro tem], Mrs. Mary Patterson was Librarian, and Mr. Voyle Stewart was an office assistant.[7] 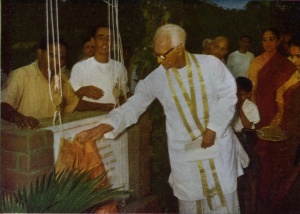 Originally the Library was housed in an addition to the Headquarters Building, but gradually it filled up the whole ground floor except the Great Hall. When the building became inadequate to house the expanding collections and the work of scholars, a new structure was designed. Its construction was supervised by George Linton. On the 81st anniversary of the library's establishment, December 28, 1967, President Sri Ram dedicated the new building.[8] By the end of 1968, the library was well established in its new facility. That year Mr. V. Ramanatha Iyer, replaced Mrs. Seetha Neelakanthan, who went to work at the Henry S. Olcott Memorial Library in the United States.[9]

On December 28, 1986, the library celebrated its centenary. A speech was given by Shri R. Venkataraman, Vice-President of India. He said, in part:

The Theosophical Society is unquestionably a seat of learning where information matures into knowledge and knowledge ripens into wisdom. Here the teachings and beliefs of various faiths have blended their basic principles to create an altogether unique confluence.[10] 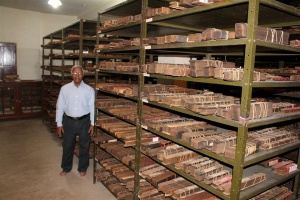 It contains over 250,000 printed volumes and around 20,000 palm-leaf manuscripts from India, Sri Lanka, China, and other places, a few of which are kept on display for visitors. The printed books include rare indological publications in several languages and a fine collection of works on different religions, philosophies and cultures.[11]

From its earliest days, the Library has welcomed scholarly Pandits who have translated palm-leaf documents and other manuscripts into English from Sanskrit, Tamil, Pāli, and other languages of South Asia. These translations have been published regularly over the years in books and in a research journal named Adyar Library Bulletin or Brahma-Vidya, which was established in 1937.