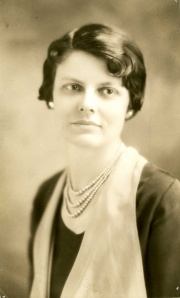 Anita Henkel was a national lecturer for the Theosophical Society in America during the 1930s and 1940s.

Anita Mackey Henkel was born April 30, 1892 in Texas. She was the youngest child in a family with two older brothers and two sisters. Her education took place at the University of Michigan, the University of Southern California, and Central State College in Oklahoma.

In 1933, Miss Henkel was recruited to work with Dr. Pieter K. Roest in the Greater America Plan. That name was derived from the concept that the Theosophical Society could contribute to developing a "greater America" by working at the local level, to bring blessing, nobility, and unity to the United States.[3] Practical suggestions for lodge improvement were to be disseminated throughout the nation by means of lectures, workshops, and written materials. For three years the two coworkers traveled across the United States to work with branches [lodges] of the Society that were depleted financially and energetically after the Great Depression and its social upheavals.[4] Other national lecturers who assisted in this work were L. W. Rogers, Dr. Nina E. Pickett, Bishop Charles Hampton, and Fred Werth. Setting up the Florida Federation in 1934 was one of Miss Henkel's most useful contributions. Even after the Greater America Plan was discontinued, she was still one of the most prominent and popular lecturers in the American Section.

In 1937-1939 Miss Henkel visited the international headquarters of the Theosophical Society in Adyar, Chennai [then Madras], India for more than a year. She sent a long letter to friends in the lodge at Baltimore, Maryland, describing her travels in colorful detail. After writing about the street life, shopping, and political developments in India, she gave an account of the 60th birthday of Dr. George Arundale, the international President of the Theosophical Society:

Perhaps it would be nice to describe Dr. Arundale's 60th birthday celebration on December 1st [1938]. It began with "puja" or prayers in the Hindu Temple. As you know, the 60th birthday is of great importance in Indian life, for they feel that you are then entering on the most important period of your life, the period for spiritual adjustment and meditation, etc. And the Hindu religion has a very special ceremony for its celebration... It began at 6 o'clock, and there were ... priests sitting on the floor of the Temple - here on the Adyar grounds - over in one section, while across the floor space sat three musicians. The Temple is small, the floor space being about the size of a good sized living room with a roof over it and four rows of pillars from front to back. The sides are all open. I could hear the beat of the drummer and the peculiar wind instrument before I got to the Temple. Before the priests were bowls of flowers, leaves, cocoanuts and various other things and during their chanting which continued for two full hours without a single break, they did various things with these. It is difficult to describe it, but it was very interesting. You can imagine it must have been when some of us sat there for the full two hours, on grass mats on the floor. When Dr. and Mrs. Arundale came they were both garlanded with huge garlands made of yellow chrysanthemums.

After Puja, Dr. Arundale and all the rest of us, spent the day going about the grounds where he gave each worker on the place some kind of gift. AtOlcott Memorial School, the school for outcaste children, he gave each child either a skirt, if a girl, or a dhoti, if a boy. This latter is a length of cloth which the boy ties around his hips. At the school they had arranged a canopy of straw mats, with a seat covered with a bright India print, cushions, etc. where they sat. Dr. Arundale gave the gifts to most of the children and when he "gave out", Rukmini gave them; there were about 500 or more including the teachers, and with each gift he gave a smile or, to the Boy Scouts, their salute. Then to the printing establishment, where every worker got a dhoti and the children of all of them got a package of Indian "sweets". At the power house the employees had written on the ground with flower petals "Happy Birthday". Some of the workers met under the Banyan tree to receive their gifts; all of our servant boys at Leadbeater Chambers brought their children to get sweets, and last we went to Besant Memorial School where an entertainment was arranged and where some of us were invited for lunch.The children here did not receive gifts as they are from well to do families and do not need them. Altogether I think there were from 1200 to 1500 people to whom he gave things. And to the rest of us he wrote a lovely little personal birthday note. Later he gave a dinner for all the Young Theosophists, in which I was included, and finally he gave all of the guests a 1939 diary.

As a final note to the day, before his birthday dinner, we had two hours of Indian music under the Banyan Tree...

The evening of the birthday, colored lights on the Banyan tree were lighted and Headquarters Building was illuminated with flood lights. Altogether it was a great day and we all were weary, weary folks...[5] 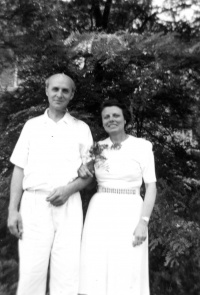 In late 1939 or early 1940, Miss Henkel married Dr. Henry Douglas Wild. He was born on November 21, 1893 to Americans in Germany. He completed his Doctor of Philosophy degree in Chicago. For a time he was married to Imogen Riley. He joined the Ann Arbor, Michigan lodge on March 7, 1926, and served as its president for two years. In September 1934 he changed his membership to the New York Theosophical Society, since he was then employed as a Professor of English at Rutgers University in New Brunswick, NJ. He was well-known in the Theosophical Society for many decades, and chaired a national committee for interpretation of Theosophy through literature. The Union Index of Theosophical Periodicals lists 38 articles by or about Dr. Wild. He wrote Brotherhood and Beauty, Shakespeare, Prophet for Our Time, and other works.

From about 1948 to 1959, Dr. Wild was teaching in California, mostly in Santa Cruz.[6] He and Anita continued being active in the Society. On June 20, 1952, the couple were among the founders of San Leandro Lodge near San Francisco, and on 8/21/1956, they helped establish the Santa Cruz Lodge. Later they lived in the Ventura, California, area, near the Krotona Institute of Theosophy, until Mrs. Wild died on January 7, 1979, and Dr. Wild a year later on April 16, 1980. 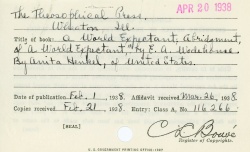 Library of Congress registration for A World Expectant

The Union Index of Theosophical Periodicals lists 19 articles by or about Anita Henkel Wild. She is not known for writing any books, but did publish a 1938 abridgment of the E. A. Wodehouse work, A World Expectant.