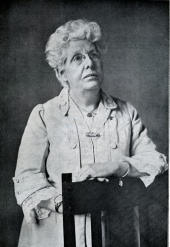 Annie Besant, social activist and President of the Theosophical Society, was considered to be one of the great orators of her day.

Lecture tours for the Theosophical Society 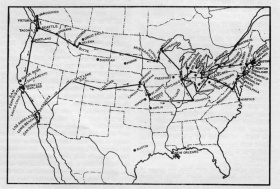 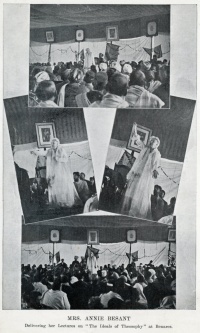 In his introduction to The Besant Spirit, George S. Arundale wrote of Dr. Besant's activities in the Indian independence movement. Each evening at 5:30, she would visit the Young Men's Indian Association building to have a cup of coffee, and to attend meetings at Gokhale Hall:

The Hall packed to the brim with youth and a sprinkling of the older generation sedately seated on the platform. Enters the white-robed figure of the Editor of New India, almost gorgeously arrayed in silken sari, with an H. R. pendant in green and gold enamel – green and gold being the then Home Rule colours. An entourage of those who were to be the principal speakers – and the chairman, if she was not herself to take the chair, as she so often did. A torrent of applause. A cheery smile if she was not too engrossed in deep conversation with her colleagues. Wave upon wave of cheers. A bow to the audience with folded hands. A rustle of chairs and a general fussification as the entourage settled itself down. And then a Hall-wide hush of expectancy, with everybody impatient to hear the world's greatest orator demand freedom for India in language that no one could possibly mistake.

If Dr. Besant were the chairman she would make a few, very brief, opening remarks, absolutely to the point, and with all that graciousness which she alone had, and which she used with such perfect tact to make everybody, and specially to those who had to speak before her, feel entirely at home. No small ordeal was it to speak in her presence, for not only did it seem so futile to keep an audience waiting with one's halting remarks when every member of the audience had come to hear one person and one person only, but what was worse one knew full well that the audience was impatient to get one over and out of the way. Woe betide any speaker who at all trespassed upon the endurance of the audience! He or she would soon receive vocal evidence of the fact that a word more and there would be a shouting down. And then, when the last speaker had exerted his voice upon ears that were growing more and more deaf if they were not already so, then – Annie Besant. Quietly rising from her chair she would stand silent for a few moments while the audience gave vent to its relief that at last she was to be heard, a little bow of acknowledgment, the hands folded, or one hand resting, perhaps, on the adjoining table, a few tiny pages of notes on occasion, and then a still small voice which just for a moment could hardly be heard beyond the first few rows in front of her. An eager craning of heads beyond and from the gallery. But the crescendo was at work, and soon wave upon wave of scintillating oratory swept through the Hall – with all the rich jewels of oratory adorning sentence after sentence, period after period. A climax is reached, perhaps a magnificent simile, so complicated as it seemed that I would wonder how it could ever be resolved. Would she remember the whole thread of it from its inception? Must it not break down through sheer complexity? Sometimes, I confess, I was in an agony of nervousness. How foolish I was! Did she at any time lose the thread? Was she ever at a loss either for a word or how to finish a simile, a metaphor, however involved? Never, and I have heard her constantly for over thirty years.

And from the climax, from the splendid finale to a simile, she would proceed to a new motif – the old perfectly rounded off and fitted into the word picture she was painting. From the heights of a consummation, with a voice ringing through vast distances and yet so perfectly modulated that she seemed but to be speaking in just a conversational voice, she would descend to the foundations of a new word structure – yet another part of the plan which was in her mind, and in her consciousness above the mind, in all its details. Then the building once more, and a new delight for the audience to see with their very eyes, and to hear with their very ears, the master craftsman at work. True indeed that the ears were not alone the medium of communication between the audience and the speaker. The eyes saw, and the sight added immensely to the sounds that were heard. It was as necessary to look at her as to hear her, for the sight of her was an inspiration, and her movements, whether of body as a whole or of her arms, were an education by themselves in that grace which must ever accompany all true oratory. I think I have come to know her gestures by heart. I think I was able to anticipate each one as it came, even though she had no set gestures, ringing innumerable and different changes on the gesture accompaniment as she developed theme after theme. But somehow one became able to see beforehand as in a film thrown upon a screen the whole picture of her immediate utterances – a picture all the more wonderful in that, kaleidoscope-like, it was ever changing and one wondered which particular variation on the essential theme she would finally choose as she came to it. Dr. Besant has herself said more than once that as she spoke she saw before her the immediate continuation of her speech, not in set sentences but in a choice of sentences, out of which she would while speaking, choose the particular phraseology most suitable to the development of her general theme. Those very near to her in thought and in work would sometimes catch a glimpse of the wealth of alternatives before her, and almost see her choosing.[1]

See also Besant writings, as some lecture transcriptions may appear in print in mixed collections of articles and lectures.

Mrs. Besant's convention lectures were generally available as pamphlets through the various branches of the Theosophical Publishing House and outlets such as the Theosophical Book Concern.[2]

Lectures printed in pamphlets and collections