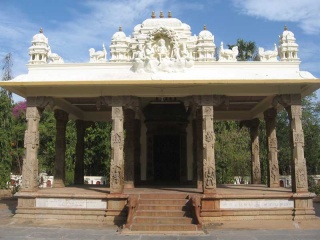 Bhārata Samāj, or "The League of the Children of India," is an organization that was created in the 1920s by Theosophists in South India. Their idea was to simplify certain rituals of Hinduism that had become needlessly complicated over time.

In 1948, C. Jinarājadāsa, then President of the Theosophical Society (Adyar), published an English translation of the ritual as it had first been performed in 1925. His Foreword gives the history of the organization and its rituals:

In 1920 some Theosophists living in South India created the Bhārata Samāj, "The League of the Children of India". Their purpose was to see if it was possible to simplify certain rituals of Hinduism, particularly that of the Upanayana, or "thread ceremony" (which consists of placing the triple thread on boys of the three castes, Brahmin, Kshatriya and Vaishya), and especially too the ceremony of marriage. Little by little from ancient days the marriage ceremony became subdivided into three or four parts, to be done on separate days. As the relations of the bride have to be invited and given hospitality during these days there is an enormous amount of expense involved. The Bhārata Samāj considered that in both these cases of ceremonies it was possible to extract the really important Vedic verses of consecration, and condense the ceremony within two hours at the most. This work of re-shaping Hindu rituals can only be done by Brahmins, who are the immemorial custodians of the Hindu sacraments. At the time the Director of the Adyar Library was Pandit A. Mahādeva Sāstri, a very distinguished Sanskrit scholar, a Brahmin, and well versed in all the ancient traditions. Under his leadership shortened rituals were created, and the Bhārata Samāj used them, and many have been glad of the shorter forms. These forms were integrally the same as those in the ordinary form, that is to say, nothing whatever was added that was not in the ancient Sanskrit version, but unessentials were omitted.

The Bhārata Samāj considered that their work could be strengthened if they had a special Bhārata Samāj Temple in the Headquarters Estate at Adyar. The Executive Council of the Society leased them a small plot of ground, and Hindu Theosophists began collecting funds for the Temple. The novel idea in this Temple is that there is no image whatsoever of any aspect of Diety, but only a Light burning, for Light is recognized by all Hindus of all the various divisions of Hinduism as a symbol of God. The Temple was to be ready for the Jubilee Convention in December 1925.

Mr. J. Krishnamurti arrived at Adyar on November 25, 1925, with Dr. Besant. All knew that Mr. Krishnamurti was averse to rituals. Then something mysterious happened, for suddenly he, a Brahmin by birth, determined to create a ritual form of worship for Hindus, where all joined collectively in the worship, in other words a congregational worship, something quite novel in Hinduism. All worship in Hinduism is individual, that is to say, each worshipper goes to the temple and offers his devotion alone with prayer, or with the help of a priest where sacramental acts are needed. The Bhārata Samāj when founded never contemplated making any innovation in this regard. Various Brahmin friends like Pandit Mahādeva Sāstri, P. K. Telang and others helped Mr. Krishnamurti, and a ritual of congregational worship was constructed, using prayers in Sanskrit already consecrated by long usage. Mr. Krishnamurti himself determined to initiate the worship. This meant that he had to memorize the necessary Sanskrit verses (he barely knew a few Sanskrit words), and be instructed in the ritual actions. I heard the rehearsals in his room near mine with somewhat of an amused smile, as I had taken my degree at Cambridge in Sanskrit, and it seemed odd that Mr. Krishnamurti, who had been denouncing rituals, and knew no Sanskrit, should create a ritual. Nevertheless he did, acting under what inspiration who shall say.

The Temple was ready for the Golden Jubilee Convention Celebrations, and privately, on December 20, it was consecrated by Dr. Besant at the request of Mr. Krishnamurti. The first ceremony of the Bhārata Samāj Pūja was in the morning of December 21st. As the matter seemed to be forgotten by others I arranged, of course with Mr. Krishnamurti's cordial assent, that on this historic occasion there should be present in the Temple with all the caste Hindus a representative of the outcastes, then called "depressed classes," now called Harijans, who were forbidden till recently to enter the precincts of any Hindu temple. A boy from the Olcott Harijan Free School was instructed to have a bath and to put on clean clothes and be present. He sat on the Temple platform with the caste Hindus.

All will remember the exquisite nature of the ceremony performed by Mr. Krishnamurti, who wore only the dhoti or waist cloth and the Brahminical thread. he was most graceful to look at in all his actions, and as he chanted and did the necessary ritual actions. He was assisted by Mr. D. Rājagopālachārya, also a Brahmin. For this occasion a translation into English had been prepared so the Bishop Leadbeater might follow the ritual, and might give a description of what was happening as seen with clairvoyance. As he held the galley proofs of the English version of the ritual, he marked at the side in pencil the various parts of the ritual actions. Later he gave a fuller description of what he saw clairvoyantly,and arranged for a pictorial representation of the thought-form created by the ritual. This appeared later in a book giving the full ritual of the Pūja, with a word-for-word English translation of the ritual by Dr. C. Kunhan Rāja, an expert Sanskrit scholar. That translation, however, is later than this, prepared I believe by the late P. K. Telang, which Bishop Leadbeater had in his hand. I reprint the first translation, giving in italicized words the various sections marked by him.

This Bhārata Samāj Pūja ritual has definitely been taken up by many Hindu Theosophists in several parts of India; and at times of Federation meetings, it is often performed each morning before the meetings of the day begin. Several Lodges conduct the ritual every week,and one Lodge every day.

It was Mr. Krishnamurti's original plan that this ritual should be performed by all Hindus, whether they were Brahmins, or not; and to have in connection with it the establishment of certain village communities of those dedicated to his work, creating in each community a school, a hospital, and temple, a meeting hall, and activities to uplift the village life of the locality. This part of the work, however, was not developed. 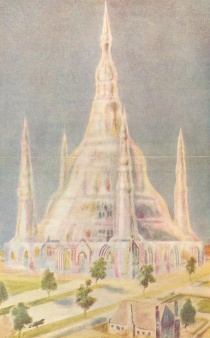 Later the question arose whether only Brahmins should perform the ritual, as is the tradition in the matter of rituals using Sanskrit. First, a special investigation was made to see whether when a Brahmin woman performed the ritual there was any difference. The celebrant was Srīmatī Rukmini Devi, and Bishop Leadbeater found that the Deva who appeared and took charge of the building of the thought-form appeared when the celebrant was a woman, just as when the celebrant was a man. There was scarcely any difference in the thought-form except that it seemed to be in some ways a "little softer and more persuasive. Krishnaji's was more compelling." (See The Theosophist, July 1932.) The question then arose as to what would happen if a non-Brahmin performed the ceremony. The ritual was therefore done by a non-Brahmin according to the form established. It was then found that the Deva did not appear, and that there was no thought-form built, though there were beautiful blue clouds of thought which the "priest" and the congregation created by their devotion, to which, of course, there was a response direct from the Solar Logos, but not through the intermediary of any Deva. Many lesser entities, nature-spirits, appeared and took delight in the invisible creations. I propounded the problem whether there was any means of sanctifying non-Brahmins for the special purpose of this ritual, so that the Deva would appear. My suggestion was as it were, to use a Masonic term, to make the non-Brahmin an "Honorary Past Master" by "putting him through the Chair". This can be done only be a group of Brahmins, who have always had the right of sitting as a "parishad" or Convocation to legislate for their ritual needs. There is no authority over a parishad except tradition.

It is fairly clear that in the past history of Hinduism there has been a certain amount of Brahminization, that is, non-Brahmins have been brought into the Brahmin caste under various conditions. There are i Java, in the Island of Bali, Javanese-Balinese who claim to be Brahmins, and I saw one performing a pūja, muttering presumably Sanskrit verses. I once met a Nepalese gentleman of high caste, with a Mongolian face, who told me he was a Brahmin. I do not doubt his word; his ancestors must have been Brahminized. The Brahmin members of the Bhārata Samāj have so far felt disinclined to move in the matter of initiating any innovation of the kind I suggested.

In Bishop Leadbeater's article in The Theosophist of April 1926, which gives coloured pictures of the Temple thought-form, he says that though ancient rituals have been performed in sacred languages like Sanskrit, Greek and Latin, the effect is exactly the same if the ceremonies are performed with intention using the old verses in any modern language of our time. This is the case when the Gāyatrī, the most sacred verse in Hinduism, was repeated by me in English with intention and understanding. With regard to the Hindu ritual he says: "very possibly in a not remote future the Bhārata Samāj may find that its services will work the better when translated into the many vernaculars of India; but that will be only when people in different parts of the country have grown accustomed to the idea of public worship and have been thoroughly instructed as to its object, and as to the extent to which they themselves can co-operate in carrying out that object."[1]