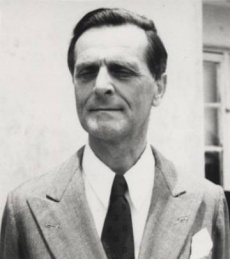 Boleslaw Leitgeber (1900-1993) was a Polish artist, writer, and diplomat who spent several years at the Adyar campus of the Theosophical Society.

Leitgeber combined the qualities of so many Central European exiles. He remained always committed to new ideas, never afraid to travel to some far corner of the world. His conversation, up until the last months of his life, remained an exotic blend of anecdote and reference, delivered in sharp, flawless sentences - in any one of four or five languages - and accompanied by the playful wag of a finger, or a high chuckle awash with Polish irony.[1]

Boleslaw Leitgeber was born in Poznan in a German-speaking region of western Poland on July 7, 1900, as the son of Jan Nepomucen Leitgeber and Maria Leitgeber. He took a degree from Poznan University and married Aleksandra Ludwika Pulaska. In later years he had two more wives: Alicja Maria Leitgeber and Gerda Leitgeber.[2] He died Truro, Cornwall on January 24, 1993, and his obituary described him as "a polymath of tireless enthusiasm" who "combined a career of international diplomacy with painting, writing, music, lecturing and drawing satirical cartoons."[3]

In retirement, he continued to live a life driven by his own restless curiosity. He travelled - and sometimes settled - in the Far East, the Middle East, Africa and Western Europe. For a time he spent some time in Adyar, near Madras, the world centre of theosophy, and became deeply involved in Eastern mystical thought. He lectured on the subject in Madras and in his late seventies published two books concerned with bringing together the tenets of East and West.

In Geneva, now well into his eighties, he collaborated with the accomplished architect Jan Stryjenski to build a studio house based on his own principles for living. Set in the steep vineyards above Lake Geneva, it became a favourite port-of-call for his wide circle of friends and a place where they could be guaranteed lively debate or a showing of his latest paintings. Refusing to give galleries a cut, he organised frequent exhibitions in his own home...

His last years were spent with his wife in St Mawes, Cornwall, where he continued a daily regimen of painting, writing and gardening.[4]

He became active in the difficult early years of the Polish Republic and joined the diplomatic service in Warsaw. In 1931 he was posted as attache to the Polish Legation in Copenhagen.

But in 1935 a political disagreement forced his resignation from the diplomatic corps. He became a journalist and the following year he moved to Berlin, as correspondent of the influential daily Kurjer Poznanski. His denouncements of Hitler became too frequent for the Nazis and they withdrew his accreditation. His editor sent him instead to London and there he remained until the outbreak of war. With his diplomatic status restored, he was appointed, under the ambassador, Count Edward Raczynski, the First Secretary to the Polish Embassy in London... [representing] the Polish Government in Exile in London and Cairo...

After the war Leitgeber moved to New York to join the United Nations. As a high-ranking UN representative, he did much to establish the fledgling organisation in India and West Africa. He retired in 1960, but not before accepting a commission from Unesco to paint the antiquities that were to be flooded by the building of the Aswan dam.[5]

During his later years, "he took a keen interest in Poland's re-emergence from the Eastern bloc, and remained in close contact with his nephew, Krzysztof Skubiszewski, Poland's present Minister of Foreign Affairs."

Even during World War II, Leitgeber pursued his lifetime interests in painting, writing, and music. "In 1941 his oils of Blitz damage in London were exhibited in a one-man show at J. Leger & Son, in Old Bond Street, and travelled to several other British cities... During the Blitz he scored a film, wrote ballets and librettos and even conducted some of his work."[6]

During his lengthy visit to Adyar, he continued painting works that were featured in a 1975 exhibition in New York City during the year of the Theosophical Society Centenary:

The February 1975 number of the Adyar News-Letter announces that the famous Adyar Banyan Tree and various other beautiful sites from The Theosophical Society Adyar Headquarters, together with a number of views of temples of India, are the themes of paintings by Boleslaw Leitgeber which will be exhibited during the month of April in New York under the auspices of the Nicholas Roerich Museum, 319 West 107th Street. The artist produced his paintings during his last visit to Adyar two years ago and his friends and members of the Society had an opportunity to see some of the sketches when they were briefly exhibited at the Kalakshetra Art Centre. The New York exhibition will be from April 6 to May 4, daily, except holidays.

Mrs. Ann Wylie, National President of the American Section, has received a letter from the artist in which he suggests that it may be possible to extend the exhibition beyond the above dates.[7] 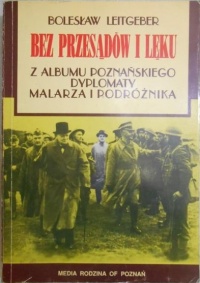 Mr. Leitgeber wrote numerous books in Polish and English. East & West in Man's Perennial Quest was the published transcriptions of a series of lectures that he delivered in Adyar for the School of the Wisdom.

His final book, "a study of relations between the Church in Rome and the Polish state, took him to the archives in Italy at the age of 90. It was published, in Polish, shortly before he died."[8]