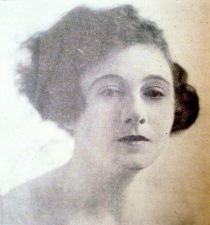 Bozena Brydlova in The Jewish Theosophist, 1926.

Bozena Brydlova was a well-respected numerologist and cabalist, and a member of the American Theosophical Society.

"Bess" Bredle (Bozena Brydlova) was born on September 11, 1886, in Cedar Rapids, Iowa to James and Anna Bredle. She had a brother Louis and a sister Alice. Bess/Bozena completed four years of college.[1]

She married Karl (Charles) Grotte (1868-1927) on November 15, 1909 in Chicago, Illinois. Bozena's parents and Karl Grotte were all born in "Czecho-Slovakia" or Bohemia. Karl was a 41-year-old traveling salesman who immigrated in 1885. The couple lived in Omaha, Nebraska, and their daughter Alice was born there in 1914. The 1920 census listed Bozena Grotte as living in Los Angeles with her 5-year-old daughter Alice. She claimed at that time to be widowed, but she had almost certainly divorced or separated. There was some contact between father and daughter, as he took Alice on a voyage to Europe in August, 1926. He continued living in Omaha until his death in 1927.[2][3]

Around 1926 Mrs. Grotte married William B. Rubin (1873-1959). Born about September 1, 1873, he emigrated from Russia with his father in 1881, with his native language listed as Yiddish. He attended the University of Wisconsin, and went into practice as an attorney in Milwaukee, in the firm of Rubin and Zabel.[4] He and his first wife Sophia had a son Abner, born October 27, 1898. He twice sought the governorship of Wisconsin and was very active in Democratic Party politics.[5] Rubin married Bozena in 1925, and the wedding announcement stated:

The marriage of William B. Rubin and Miss Bozena Brydlova, of New York and Hollywood, took place in the Supreme Court chambers at the State Capital, Madison, last Saturday. Miss Brydlova is an authoress who has contributed many articles on scientific subjects to magazines, and is at present preparing an eight-volume scientific work.[6]

The 1940 U.S. Census lists Rubin as a 66-year-old attorney married to Josephine, so he seems to have been married three times. He was divorced from Bozena around 1929, because according to the 1930 U.S. Census she owned a house in Los Angeles, valued at $15,000, and with Alice in school. Under "marital condition" she is listed as divorced rather than widowed, and she was back to using the surname Grotte.[7] .

Bozena Brydlova married a third time, to Hollywood screenwriter Herbert H. Van Loan (1885-1974). One wedding announcement said that "Miss Brydlova, Hollywood author of Jewish history, was divorced three years ago from Rubin" and gave some colorful details about Van Loan's divorce and multiple previous engagements to starlets, while another version said that they were being wed a second time following a ceremony in Tijuana, Mexico.[8][9] The 1940 census finds the couple living in Los Angeles, with her working as a teacher in a private school.[10] She lived until January, 1969.[11] Van Loan said of his wife,

She is a very remarkable woman...very attractive and she has brains. She is one of the most talented women I have ever met. She speaks several languages, is a fine singer and an excellent pianist. She is one of the greatest authorities on the Talmud in this country. She is exactly the type of woman an author should have for a wife. I am confident my name will never be sprayed around a divorce court again."[12]

Mrs. Bozena Grotte of Los Angeles was admitted to the American Theosophical Society as a member-at-large on December 7, 1919, with Foster Bailey and Ila Fain (later Mrs. Augustus Francis Knudsen) as sponsors. Society headquarters and staff were then located in Hollywood, not far from her home. Her membership lapsed briefly before she was readmitted to the Milwaukee lodge in 1926, and at that point she reported her new status as Mrs. W. B. Rubin.[13] She was active with the Society for a few years, publishing two books in 1927 at the Theosophical Press.

Mrs. Rubin was vice president of the Association of Hebrew Theosophists. The headquarters of that organization was in Seattle, but a local branch in Milwaukee was headed by E. F. Silberman. She wrote articles for The Jewish Theosophist: 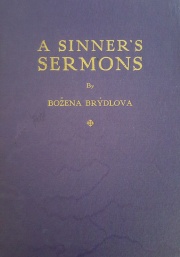 Studies of numerology comprise most of Ms. Brydlova's literary work. The Flame of the Fog is a collection of stories and mystical musings. The author wrote of her writing process:

I chatter to the world by mouth, by pen, by pencil. My eyes flash, my body tingles, and my words grow eloquent when commanding the attention of the masses. Syllables grow into words, words into phrases, phrases into essaying discourse, and even my eager spirit startles astonished at the daring of its expression.[14]