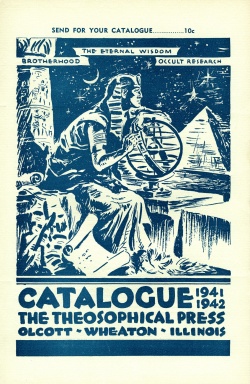 Advertisement in The American Theosophist, 1941

The company was established in 1922 from the Theosophical Book Concern that had in 1916 become an agency of the Theosophical Publishing House in Adyar. After L. W. Rogers became President in 1920, he negotiated with International President Annie Besant to return the book business to the American Section headquarters in Chicago. The name "The Theosophical Press" was suggested by Miss Gail Wilson in April 1922.[1][2] Mr. Rogers arranged to purchase a headquarters building that would suitably house both the Section offices and the revived publishing business. The house at 826 Oakdale was quickly expanded to accommodate the stock of books received from California when the original Krotona site was sold.[3] The new book business was quickly a success; at the 1923 annual convention, book sales exceeded $1000.[4] Rogers developed a "new book plan" to encourage local book stores all over the country to stock Theosophical Press books.[5]


The company had its own printing presses and bindery equipment. When the American Theosophical Society moved to new headquarters in Wheaton, Illinois in September, 1927, the publishing company moved as well. The Theosophical Press printed books, pamphlets, periodicals such as The American Theosophist, publicity materials, and administrative forms.

On behalf of Mr. Rogers we are glad to announce that his books, hitherto distributed through the Theo Book Company, are now available exclusively through the Theosophical Press, Wheaton, to whom Mr. Rogers is turning over the stock of books on hand and through whom all future orders will be filled... Discounts to lodges and other selling agencies remain unchanged.[6]

In 1947, a New York member named Captain Russell Lloyd Jones financed publication of a new edition of The Essential Unity of All Religions by Bhagavan Das. Fifteen hundred copies of this important work were distributed to "Outstanding people in the business, education and cultural world." One of those copies reached the hands of David Lawrence, editor of U. S. News and World Report, who mentioned it in a 1966 editorial. That led to the work's reissue as the first Quest Books paperback edition.[7]

Operation of the Press

In 1954, Helen Zahara wrote a detailed description of the operation of the Press under the manager, Lola C. Fauser, who had held that position for ten years. Miss Zahara began by describing the book display room off the lobby of the headquarters building:

Visitors are invariably surprised to learn of the impressive number of the Press publications as they are represented in an alphabetical (by title) reference library containing one each of every available book or pamphlet, in addition to separate shelves of author's works and different groupings of various subjects insofar as the limitation of space permits...

As the book sales department of The Theosophical Society in America, The Theosophical Press operates under its own name for convenience in establishing contacts with other publishers, but it is not organized as a separate institution and its workers are a integral part of the staff at Headquarters.

Being essentially a mail order business, there is a heavy daily mail... Order desk #1 under the charge of Mrs. [Lula B.] Gruendeman is given the charge account orders, including all lodge accounts as well as those of individuals and book dealers... Order desk #2 in charge of Clarice Richie clears all cash orders which the daily cash report brings...

The shipping department of the Press is located in the basement and there we find the cheerful presence of Harry T. McAllister Jr, who has been on the staff since 1948 and is well known among the Young Theosophists...

The supply of theosophical publications comes largely from the Theosophical Publishing House at Adyar and these are mainly printed at the Vasanta Press founded by Dr. Annie Besant The books are shipped mostly by freight from India...

The Theosophical Publishing House of London, England, also supplies a number of titles which they publish and these come by mail, as they are not required in sufficient quantity to warrant freight shipments.

All books that do not bear the imprint of The Theosophical Press as the publisher have affixed, usually on the title page, a small sticker: "Sold by The Theosophical Press, Wheaton, Illinois" to identify the source in U. S. A. It is often this small label that brings inquiries to the Press for more information about their publications. When shipments of several thousands of books and pamphlets arrive, the affixing of these stickers is quire a project before the books are wrapped for storage. All books are given dust protection by being paper wrapped in packages of five, ten, or more copies, according to size, and of course each package is appropriately labeled as to title and quantity.

The Theosophical Press is the exclusive agent in U. S. A. for The Theosophist and solicits and forwards subscriptions for the magazine, maintaining the records for this country...

The Press serves and helps the work of The Theosophical Book Gift Institute in this Section. The T. B. G. I. bears the expense involved in the distribution of books to libraries, but the labor of shipping and invoicing is done at a minimum cost by the Press. There is also cooperation with the National Library of the Society in America, both in providing books and the mailing of books to library borrowers.

Whenever an Olcott Sunday [afternoon] lecture for the public is held, the Press is open and many visitors take advantage of the opportunity to see the books available for purchase. But the busiest time is during the summer sessions, when the larger office [across the hall] becomes the display room and is thronged with visitors...[8]

Convergence of several events led to the reorganization and renaming of the publishing house. Herbert A. Kern, Sr. and The Kern Foundation began in the early 1960s to issue grants to support Theosophical work, and Mr. Kern was especially interested in dissemination of information through book publishing. Joy Mills, in her first year as President of the Theosophical Society in America, was making preparations to participate in the 1966 World Congress in Salzburg - the first such gathering in thirty years.

Anticipating the impact our new paperback publishing program would have on the world Society and feeling the need for the development of a new literature or revising some of our older books, we had called on the International President, N. Sri Ram, to convene two special invitational conferences during the Congress period, one to deal with international publishing agreements among the three major English language publishing houses (Wheaton, Adyar and London), and the other to consider the modernization of theosophical literature. Our proposals had been supported by the Australian and English Sections, and the President had readily agreed to the scheduling of such discussions along with a meeting of the Society's General Council. To ensure our representation at these sessions, we had requested a special grant from the Kern Foundation to enable us to extend World Congress fellowships to five members intimately involved in these areas of our work, while the National Board of Directors had already approved sponsoring me [Joy Mills] as the Section's official representative at the Congress.[9]

Quest Books, the new line of paperback books, was launched early in 1966, with The Essential Unity of All Religions by Bhagavan Das as the first title. Demand for that book was high due to an editorial written by David Lawrence in U. S. News and World Report. It had been printed by Theosophical Press in 1939, and reprinted in 1947, but sold out completely.

The three English language publishing houses of the Society, each retaining its own management and organizational structure, would now be known under a single name, the works of any one of them bearing the addresses of the other two.[10]

After that agreement was ratified by the TSA's Board of Directors on September 1, 1966, the Theosophical Press officially became Theosophical Publishing House, Wheaton.

These are examples of works first published by the Theosophical Press, including many written by American Theosophists or transcribed from lectures.

Published concurrently with other publishers