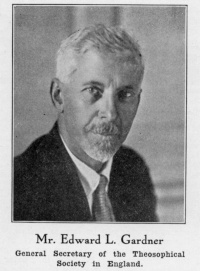 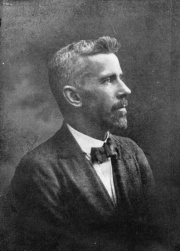 E. L. Gardner as member of Exec Committee of TS in England 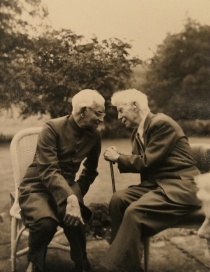 Edward Lewis Gardner (1869-1969) was a noted writer and lecturer from the English Section of the Theosophical Society based in Adyar, India.

Gardner was born at Coggeshall, Essex, England on March 19, 1869 to father Matthias A. Gardner, a brick and tile manufacturer.[1] He attended school in Lewisham.[2] Edward married Clara Beard in 1892, and they had two sons, Ralph and Leslie. The family lived at Willesden in Middlesex, where Edward had a business as a builder and contractor.[3] Clara died in 1920. Two years later, he married Eliza Adelaide Draper, a respected Theosophical writer and lecturer who was born in the United States.

Gardner joined the TS on April 17, 1907 at the Blavatsky Lodge in London.[4] He served as General Secretary of the English Section from 1924-28, and was a popular lecturer and writer for several decades. Clara Codd referred to him as "the English sage."[5]

According to The Theosophical Encyclopedia,

Gardner traveled widely as an International Lecturer for the Theosophical Society. In 1926 he founded the theosophical community at Stamford House, Wimbledon, London, and presided over it until 1940. Gardner was one of a group that bought Tekels Park, now vested in the English section of the TS. [6]

He served as the Chairman of the Council of the Theosophical World University that George S. Arundale aspired to establish.[7]

In 1925 Annie Besant put forward the idea of a Theosophical World University “to co-ordinate existing theosophical educational activities in various parts of the world”. Mr. Gardner was appointed Chairman of the Council and members of his Scientific Group worked with him and Prof. Marcault on a progressive programme of lectures, correspondence courses and research in the field of science, art, education, medicine, psychology, symbology, mythology (Greek and Indian) and philosophy. During part of this time, l924-l928, Mr. Gardner also held the onerous position of General Secretary of the English Section with many visits to Adyar and a lecture tour of the United States and Canada.

By 1934 it was generally realised that the university idea was too grandiose and Mr. Gardner used his influence to arrange the transfer of its activities to a newly formed Theosophical Research Centre of which he was chairman. The T.W.U. thus went into the background as a council only, meeting once a year, as a body to inspire the formation in other countries of theosophical research centres. He continued as chairman of the T.W.U. until his death, although he inspired a change of name to Theosophical World Trust for Education and Research, as a more realistic title for this world body.

From its inception he took an active part in the work of the T.R.C. and particularly in the Science Group. He had a special ability to inspire other people to work in a wide variety of branches of modern scholarship, including those of which he was not specially well-informed; he was so interested in everything that could help forward the theosophical movement and was so quick to grasp the essentials of a new subject.

From 1926 to 1940 he founded and presided over a theosophical community at Stamford House, Wimbledon, where members of the Science Group often met him for inspiration and advice. He was also one of the founders of the Tekels Park Estate, Camberley, in 1928 as a theosophical community, and where the T.R.C. has held a study week-end every year in May or June since 1952. The last 16 years of his life were spent in a charming house in Tekels Park. Many of us will retain happy memories of valuable personal and group discussions that we were privileged to have with him there.[8]

Gardner had the honor of delivering three Blavatsky Lectures. In 1918 he presented the inaugural lecture on the subject of "Matter is the Shadow of Spirit," followed by "The Nature and Function of the Soul" in 1946, and "Whence Come the Gods? and Related Studies" in 1959.

Some controversy arose when Gardner published a pamphlet There Is No Religion Higher Than Truth in 1964. He made the allegation that the clairvoyant visions supposedly experienced by Charles Webster Leadbeater were simply examples of unconscious kriyashakti (thought power, or self-delusion). Geoffrey Hodson defended CWL vigorously, and his wife Sandra compiled a book on the subject called C. W. Leadbeater: A Great Occultist. Pedro Oliveira followed up with an article, "The Mystery of C. W. Leadbeater’s Clairvoyance," and a portion of his book, CWL Speaks.

A major episode in Gardner's life involved the Cottingley Fairies. In 1917 two young girl cousins claimed to have taken photographs of fairies in their garden. Prints of the photos were given to Edward Gardner, who shared them with Arthur Conan Doyle. Doyle wrote an article for Strand magazine, and later a book, The Coming of the Fairies. Clairvoyant Geoffrey Hodson spent days with the girls, and verified that fairies were indeed perceptible in the garden. Gardner lectured and wrote about fairies for some years.[9] Great public attention came to all involved, with many doubting the accuracy of the photographs and the truthfulness of the girls. Decades later, the girls admitted that while they had seen fairies, the photographs had been faked.[10] 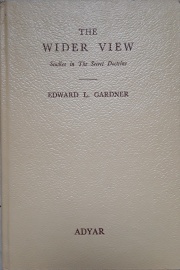 By 1931, Mr. Gardner had retired from his business.[11] He and Adelaide traveled, lectured, and wrote for Theosophical audiences. The Gardners were highly regarded and much in demand. A typical comment from their 1931 American tour was:

Mr. E. L. Gardner, formerly General Secretary of the English Section, is an honored visitor and a very welcome speaker on the program of the New York Federation for the month of November. Mr. Gardner is a student and scholar along scientific and progressive lines of thought as well as a theosophical student, and the series of classes and members’ meetings which he will direct in New York City will be tremendously valuable. Mrs. Gardner has accompanied her husband to this country and she will go to Boston, Baltimore and Philadelphia to fill several lecture engagements.[12]

The Gardners lived in Tekels Park for their final years. Edward died on June 30, 1969 in Surrey.[13] Adelaide had predeceased him in 1960.

Gardner was much known for his writings. The Union Index of Theosophical Periodicals lists 74 articles under the name EL Gardner, 3 under E L Gardner, and 14 under Edward L Gardner.

In 1940 he was awarded the Subba Row Medal for his contributions to Theosophical literature, nominated by Sidney A. Cook.[14] These are books and pamphlets that he wrote: