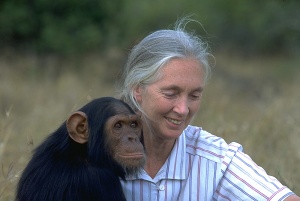 Jane Morris Goodall is a British primatologist, ethologist, and anthropologist, known for her pioneering field research on chimpanzees in Africa. Her organization, the Jane Goodall Institute, has a web page at http://www.janegoodall.org/.

She was born Valerie Jane Morris-Goodall on April 3, 1934 in London, England. She was educated at a private school, Uplands, in Dorset, receiving a certificate in 1950. She wanted to attend a university, but her family could not afford the fees, and no scholarship was available She went to London seeking secretarial work, and while there she fed her craving for knowledge with free courses from the London School of Economics, by visiting museums and art galleries.[1]

Jane Goodall described her introduction to Theosophy, during the early London years, in her autobiography, Reason for Hope: A Spiritual Journey:

I also began to attend courses held once a week on the teachings of Theosophy. I was especially drawn to the concepts of karma and reincarnation, because I was still trying very hard to make sense of the horrors of the war. If karma was operating, Hitler and the Nazis would pay for their crimes in some future life, while those who were killed in battle or tortured in the death camps may have been paying for former transgressions. They would then either be reborn to a better life or go to some kind of heaven or paradise. I had never been able to believe that God would give us poor frail humans only one chance at making it – that we would be assigned to some kind of hell because we failed during ‘one’ experience of mortal life. After all, one human life span measured against eternity – it is gone faster than a millionth of a second. So the concept of karma and reincarnation made logical sense to me.

The woman who taught our Theosophy course was charismatic. Most of the young men were semi in love with her and I thought she was brilliant. She would take a little idea and develop it in a thousand different directions. She constantly emphasized the need to stop what she called "circling thought" so that we could become more aware of things going on around us. Circling thought, she explained, is the constant flow of thoughts that go through one’s mind, almost all the time. Trying to make my mind a blank, thought-less, was perhaps the hardest task of all. Much of what I learned in those classes was very helpful to my own constantly evolving personal beliefs about God and the universe. I wrote quite a lot of poetry at the time: the following is a good example.

When the night wind makes the pine trees creak
And the pale clouds glide across the dark sky,
Go out, my child, go out and seek
Your soul: the eternal I.

For all the grasses rustling at your feet
And every flaming star that glitters high
Above you, close up and meet
In you: the Eternal I.

Yes, my child, go out into the world; walk slow
And silent, comprehending all, and by and by
Your soul, the Universe, will know
Itself: the Eternal I.

After a session some of us would go to a coffeehouse and talk for hours and I learned a great deal about life during those late-night sessions. We were a motley collection, representing all strata of society. There was the “Worm Lady,” who jumped to her feet repeatedly during the classes to offer pearls of wisdom, her points invariably illustrated by reference to earthworms because of the symbolism of such lowly creatures who yet aerated the soil, that all might live. It was amazing how many times worms were mentioned thanks to the Worm Lady. And there was an utterly fascinating Dutchman who had been part of the Dutch resistance...
Theosophy captivated me – but my deep love of Jesus remained…...[2]

The autobiography goes on to discuss many aspects of Goodall's life as a spiritual journey, mentioning her mystical experiences; out-of-body dreams; adoption of a vegetarian diet; and her beliefs in reincarnation and the unity of all life.

Dr. Goodall wrote in 1999 of a profound mystical experience in the forest of Gombe:

“Lost in awe at the beauty around me, I must have slipped into a state of heightened awareness. It is hard – impossible really – to put into words the moment of truth that suddenly came upon me then. Even the mystics are unable to describe their brief flashes of spiritual ecstasy. It seemed to me, as I struggled afterward to recall the experience, the self was utterly absent: I and the chimpanzees, the earth and trees and air, seemed to merge, to become one with the spirit power of life itself. The air was filled with a feathered symphony, the evensong of birds. I heard new frequencies in their music and also in singing insects’ voices – notes so high and sweet I was amazed. Never had I been so intensely aware of the shape, the color of the individual leaves, the varied patterns of the veins that made each one unique. Scents were clear as well, easily identifiable: fermenting, overripe fruit; waterlogged earth; cold, wet bark; the damp odor of chimpanzee hair, and yes, my own too. And the aromatic scent of young, crushed leaves was almost overpowering….

That afternoon, it had been as though an unseen hand had drawn back a curtain and, for the briefest moment, I had seen through such a window. In a flash of “outsight” I had known timelessness and quiet ecstasy, sensed a truth of which mainstream science is merely a small fraction. And I knew that the revelation would be with me for the rest of my life, imperfectly remembered yet always within. A source of strength on which I could draw when life seemed harsh or cruel or desperate.[3]

In 1960, the young woman visited a childhood friend in Kenya, and during that trip to Africa she sought out the famous anthropologist Dr. Louis Leakey. He offered her a job, and later arranged for her to enter a doctoral program in ethology at Cambridge University. His sponsorship led to her long-term study of social and family interactions of wild chimpanzees in Gombe Stream National Park, Tanzania. In 1964, she was filmed by Dutch wildlife photographer Baron Hugo van Lawick for National Geographic Society, and they married. The union lasted ten years, and a son, Hugo, was born in 1967. Through a series of documentary films, Dr. Goodall's work became known to a wide audience and redefined understanding of chimpanzees. "From 1970-1975, Goodall held a visiting professorship in psychiatry at Stanford University. In 1973 she was appointed honorary visiting professor of Zoology at the University of Dar es Salaam in Tanzania, a position she still holds. Her marriage to van Lawick over, she wed Derek Bryceson, a former member of Parliament [of Tanzania], in 1973."[4]

In 1977, Dr. Goodall founded the Jane Goodall Institute, based in Silver Spring, Maryland It supports programs for environmental research, education, and research, including the continuing research on primates in the Gombe Stream Research Centre in Tanzania. "The Jane Goodall Institute is the center of a network of institutes in 13 other countries, including Canada, China, Holland, Uganda and South Africa."[5] The organization has a youth service program called "Roots and Shoots" that has tens of thousands of members in about 100 countries.[6] Dr. Goodall spends most of her time now lecturing all over the world.

Goodall has also received the Medal of Tanzania for her environmental work, the Hubbard Medal from the National Geographic Society; and the Kyoto Prize from Japan. In 2001, the World Movement for Nonviolence awared the third Gandhi/King Award for Nonviolence. Commemorative postage stamps have been issued in her honor in Tanzania, Gambia, Uganda, and Mali.