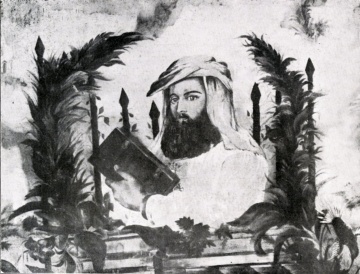 King, John, a well-known materialization in spiritualistic circles in the 1870's. Somewhat mysterious in character and generally claiming to be the spirit of the pirate, Henry Morgan. There are several references in occult literature to the employment by Adepts and other proficients in the occult arts of elementals and elementaries for accomplishing work which they wish to have done. HPB apparently used John King in this manner for some time while in the USA. A picture of him produced jointly by him and HPB is at the Headquarters. ML, p. 277; HPB VI: 270-71; HPB Speaks I: 83 et seq.[1]

In reference to the identity of John King, Mme. Blavatsky writes:

I have told Colonel Olcott and many others that the form of a man, with a dark pale face, black beard, and white flowing garments and fettah, that some of them had met about the house and my rooms, was that of a "John King". I had given him that name for reasons that will be fully explained very soon, and I laughed heartily at the easy way the astral body of a living man could be mistaken for, and accepted as, a spirit. And I had told them that I had known that "John King" since 1860; for it was the form of an Eastern adept, who has since gone for his final initiation, passing through and visiting us in his living body on his way, at Bombay. (...) I have known and conversed with many a "John King" in my life—a generic name for more than one spook—but, thank heaven, I was never yet "controlled" by one![2]

Based on these words speculation arouse that the "Eastern adept" could be Master K.H. But later she identified him with a Greek Adept, probably referring to Master Hillarion:

Every Theosophist at headquarters knows that I meant a Greek gentleman, whom I have known since 1860, whereas I had never seen Mr. Sinnett’s correspondent before 1868.[3]