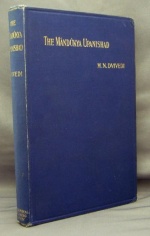 Manilal Nabhubhai Dvivedi was a prominent Indian scholar whose translations of Sanskrit works were published in several Theosophical journals. He was particularly interested in the teachings of Śaṅkarācārya or S'ankara, and the school of Advaita Vedānta.

Dvidedi was educated at the University of Bombay, and served as an Inspector of Schools before he became a Professor of Sanskrit in Samaladasa College, the institution of the Rajah of Bhaunagar, north of Bombay. His English-language translations and papers were presented in congresses of Stockholm, Vienna, Lincoln, and Chicago. He also wrote extensively in Gujarati, under the patronage of the Rajahs of Bhaunagar Baroda and Kutch.[1]

In 1891, William Quan Judge announced that Professor Dvidedi would be contributing to the Oriental Department Papers that were being published in the United States.

The General Secretary [Judge] is now able to announce the definite engagement as Pandit for the American Section of Prof. Manilal N. Dvivedi of Nadiad, India. He is a B. A. of the University of Bombay, graduating with honors and prizes, has been Inspector of Schools, and is now Professor of Sanscrit The translations the Professor will furnish will undoubtedly be of great value, and the American Section may well be congratulated on the acquisition of his contributions to the Oriental Department.[2].

The Professor wrote eleven articles for the Oriental Department Papers during the years 1891-1893.

Professor Dvivedi was a speaker at the World's Parliament of Religions in Chicago, 1893, where he became further acquainted with representatives of the Theosophical Society, such as William Quan Judge, Annie Besant, G. N. Chakravarti, and Anagarika Dharmapala. He discussed discussed "The Religious Belief of the Hindus." Here are excerpts:

Hinduism is a wide term, but, at the same time, a vague term. The word Hindu was invented by the Mohammedan conquerors of Aryavata, the historical name of India, and it denotes all who reside beyond the Indus. Hinduism, therefore, correctly speaking, is no religion at all. It embraces within its wide intention all shades of thought, from the atheistic Jainas and Bauddhas to the theistic Sampradaikas and Samajists and the rationalistic Advaytins. But we may agree to use the term in the sense of that body of philosophical and religious principles which are professed in part or whole by the inhabitants of India.

In discussing the God-idea as contained in the Vedas. he said:

In the Vedas there are marks everywhere of the recognition of the idea of one God, the God of nature, manifesting himself in many forms. This word, God, is one of those which have been the stumbling-block of philosophy. God, in the sense of a personal creator of the universe, is not known in the Veda, and the highest effort of rationalistic thought in India has been to see God in the totality of all that is. And, indeed, it is doubtful whether philosophy. be it that of a Kant or a Hegel, has ever accomplished anything more. . . .

I humbly beg to differ from those who see in monotheism, in the recognition of a personal God apart from nature, the acme of intellectual development. I believe that is only a kind of anthropomorphism which the human mind stumbles upon in its first efforts to understand the unknown. The ultimate satisfaction of human reason and emotion lies in the realization of that universal essence which is the all. And I hold an irrefragable evidence that this idea is present in the Veda, the numerous gods and their invocations notwithstanding. This idea of the formless all, the Sat—i.e., esse — being — called Atman and Brahman in the Upanishads, and further explained in the Darsanas, is the central idea of the Veda, nay, the root idea of the Hindu religion in general.[3]

He went on to suggest that there could be "a genuine science of religion, universal in its scope and application."

An obituary was published in the journal, The Open Court:

The brother of Manilal Nabhubai Dvivedi, Professor of Sanscrit, Nadiad Gujarat, Bombay Presidency, India, informs us of the death of this prominent Hindu scholar and philosopher. Dvivedi was well acquainted with Western thought, yet his heart was rooted in the philosophy of his own people. His master was S'ankara the greatest representative of Brahman philosophy. The trend of Mr. Dvivedi's thought was monistic, and we deem him one of the best, perhaps the best, interpreter of Brahman thought ...

We had some correspondence with the late Professor Dvivedi on the contrast between Buddhism and S'ankara's conception of the self. Professor Dvivedi was anxious to reconcile both systems, and it may be that he succeeded in settling the problem to his own satisfaction. We ceased to hear from him when disease overtook him, and regret now to learn of his death. India has lost in him one of her best sons, and a man whose life was helpful in leading the Hindus toward a higher condition of existence by showing them how they could preserve their own and yet adopt all the good of Western civilisation.[4]

The Union Index of Theosophical Periodicals lists 45 articles by or about Professor Dvidedi. He was published in The Lamp, Le Lotus Bleu, Lucifer, The Path, The Theosophist, The American Theosophist (1913-1914 version), and Oriental Department Papers.

Dvidedi wrote books in English and in Gujarati. His translations provided the Sanskrit text along with the English translation. His books included: