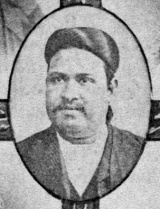 Gyanandra Nath Chakravarti (1861-1936) was an Indian Theosophist and scholar who greatly impressed the world with his excellent lectures at the 1893 World's Parliament of Religions in Chicago.

In 1861 Gyanandra Nath Chakravarti was born a Brahmin of the Sandilya Gotra. He was educated at a missionary school at Benares, then at Calcutta University, and at Muir College, Allahabad. He was awarded M.A. and LLB. degrees.[1]

Subsequently, he had filled the chair of physical science at a college in Bareilly, and, at the time of meeting Mr. Bertram Keightley [around 1891], he was Professor of mathematics at Muir College. He had also studied law and had been admitted to practice in the English courts in India. Nor had his breeding been in any wise neglected from the oriental standpoint. He had been strictly reared in all the observances of his caste, was thoroughly versed in the scriptures and traditions of Brahminism, and was highly esteemed by his co-religionists as well as among the English.[2]

"Throughout his life, the Vice-Chancellor, wherever he was staying, rose at three in the morning and meditated until six."[5] He died in 1936. 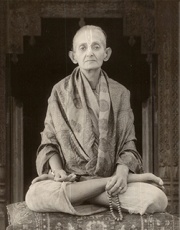 His wife, a Bengali named Monica Devi Chakravarti (1882-1944), was a remarkable woman. She had four children and was said to have adopted 40 more.

In 1925, she had an overwhelming experience of the unitive vision. She sought her husband's permission to become a wandering mendicant monk. As his wife's guru, Dr. Chakravarti invested Monica with the robes of the Vaishnava order of Vairagis. She shaved her head and took the name Sri Yashoda Mai.[6]

She became spiritual advisor to Ronald Nixon (1898–1965), who was later known as Sri Krishna Prem. They founded Mirtola, the famous ashram.[7]

As a young man Chakravarti was introduced to the Theosophical Society by his uncle and met Society Founders Helena Petrovna Blavatsky and Colonel Henry Steel Olcott.

In his twentieth year he became, through the influence of his uncle, a member of the Cawnpore Branch of the T.S. Young as he was, he was selected as a member of the Committee which, at the Convention in December, 1884, unanimously recommended that no defense be made on behalf of H.P.B. against the Coulomb charges. In the intervening years he had contributed occasional articles to The Theosophist and was, in 1893, President of the Students Theosophical Association at Allahabad...

He was well known to Col. Olcott and on friendly terms with both native and English members of the T.S. in India.

Although Prof. Chakravarti had not been active Theosophically and was not a member of the Esoteric Section but was, on the contrary, a chela of one of the numerous Yoga systems in India, Mr. Bertram Keightley soon came to believe him to be, if not a Mahatma, at least an Occultist of high rank and in direct connection with the Masters of H.P.B.[8]

People who sided with W. Q. Judge in the controversy that resulted in the 1895 split of American Section usually regard Chakravarti as a failed disciple who at the time departed "more from the lines followed by H.P.B. and those wedded to her view of the true mission of the Theosophical Society."[9]

G. N. Chakravarti left India in June and journeyed to England where he remained two months, chiefly as the guest of Mr. Bertram Keightley. He met all the leading Theosophists in Britain and was intensely active among them during his entire stay. His coming had been anticipated with the utmost interest, as may be imagined, and his suavity, his versatility and great knowledge, added to the lure of oriental mystery with which he was surrounded, gave him a vogue that rose to veneration on the part of the "household" at Avenue Road. Toward the end of August he sailed for America in company with Mrs. Besant, Miss Muller, and others. In the United States the party was received by Mr. Judge and leading American Theosophists as distinguished visitors.[10]

Prof. G. N. Chakravarti represented Brahmanism, bringing credentials from three Brahmanical Sabhâs. He was Professor of Mathematics at the University of Allâhâbâd (ancient Prayâga), and a member of the T.S. Branch in that city.[11]

The Professor traveled by train from New York with Mr. Judge and Mrs. Besant. On September 9, they made a stop in Ohio and lectured at the dedication of the new Theosophical Hall of the Cincinnati Theosophical Society. Their lectures were outlined in the lodge's minutes book, which they all signed.[12]

It has been suggested that around the time of the Parliament, Chakravarti influenced a susceptible Annie Besant – that he cast a "glamour" over her in a manner close to black magic. Sven Eek and Boris de Zirkoff summarized this viewpoint:

It so happened that Annie Besant was especially strongly impressed by the personality of Chakravarti, and from that time on her opinions became colored by his point of view. Playing on her desire for occult powers, Chakravarti "captured" Mrs. Besant in less than two months. Judge watched his growing ascendancy over her mind with anxiety, as he intuitively felt that a subtle attempt was being made then to divert her efforts from the genuine line of occultism into a sectarian offshoot. He became more uneasy when, on Mrs. Besant's return to England with the party that included Chakravarti, she prepared to go to India on a long lecture tour, and he warned her that it was not an auspicious tie to go. Before leaving, she spent some time in London during which she saw a good deal of the Brahmana; the latter left for India shortly before Mrs. Besant and Countess Wachtmeister started for the Orient.[13]

Whether that viewpoint is correct is very much open to debate, but it was used to attack Mrs. Besant for many years by Theosophists who opposed her role in the Judge Case and the 1895 Secession. Bertram Keightley vigorously responded to charges that the professor had influenced the second edition of The Secret Doctrine:

Our friend Mr. Chakravarti had nothing whatever to say or to do with reference to the second edition – the so-called Besant edition – of the Secret Doctrine. It was far more Mr. Mead than Mrs. Besant who was responsible for it.[14]

His name was also bandied about in speculation that he would support a faction who considered seceding from the Theosophical Society around 1908. Mrs. Besant responded:

Various attempts have been made since my election, to organize a secession that would not be ridiculous in point of numbers. As Mr. Chakravarti's name has been mentioned in this connection in England, America, France, and India, it is well that it should be known that he will take no part in any such movement and would regard any secession as a blow struck at the T. S., of which he is a devoted member.[15]

Professor Chakravarti was awarded the title and medal of "Rai Bahadur" for service to the British Empire.[16] A Dr. Chakravarti Gold Medal is awarded annually at Lucknow University.

The Union Index of Theosophical Periodicals lists articles by or about Chakravarti.