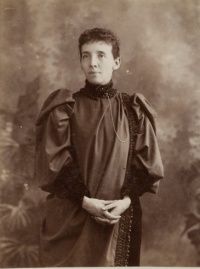 Isabel Cooper-Oakley (1854-1914) was an English Theosophist and friend of H. P. Blavatsky.

On April 6, 1884, the Cooper-Oakleys were admitted as members of the Theosophical Society in London.[2] They accompanied H. P. Blavatsky to India later in the year. Isabel returned to England the next year while her husband stayed on in India.[3] She was a member of HPB's Inner Group in London.

Henry Steel Olcott wrote to Francesca Arundale that "Mrs. Oakley has made the greatest hit among them all, and is vastly popular already" following her lectures at the 1884 annual convention at the Adyar headquarters of the Theosophical Society. He further reported that the Oakleys had been appointed to a Central Committee formed "to receive and digest further Esoteric Teachings, and transmit it to the Inner Group of Branches."[4]

She was utterly devoted to H.P.B. But she was constantly worried by want [lack] of health,and required much attention. When she reached India, she found that her health suffered more than she expected, and she was forced to return to England. In spite of various and continued handicaps to health, Mrs. Cooper-Oakley toiled day after day to the end of her life to serve the Masters and the Theosophical Society. In her devotion to them and H.P.B she was flawless. But neither she nor her husband could be called upon for strenuous service.[5]

In 1893 she visited Sydney, Australia, and then represented the Australian Theosophists at the World's Parliament of Religions, where she was a speaker.

I must mention the passing away of one worker whom you will all remember by name, and many by personal knowledge, my dear friend Mrs. Cooper-Oakley. She was suffering under consumption while she was here, two years ago. She would go back in the last bitter winter to Hungary, and that has killed the body, and left Hungary without its best worker.[7]

Our Society has to record the sad loss it sustained during the year by the death of Mrs. Isabel Cooper-Oakley, to whom so much was owed by the Italian Section for its constitution and organisation at its inception, and during the first active years of its existence. Her memory will always live in the hearts of all members in this country with lasting gratitude.[8]

Mrs. Cooper-Oakley was a proficient writer. She contributed at least 71 articles to Theosophical journals, according to the Union Index of Theosophical Periodicals, and was mentioned in dozens more, including reviews of her many books: