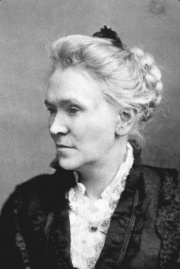 Matilda Electa Joslyn Gage (March 24, 1826 – March 18, 1898) was an American Theosophist known for her activism in the areas of women's suffrage, Native American rights, and abolition of slavery. She was raised as a freethinker, and became a prolific author.

Matilda was born on March 24, 1826 in Cicero, NY (near Syracuse) to Hezekiah and Helen Joslyn. Her father was a noted abolitionist who educated his daughter to be a “freethinker”. Their home in Fayetteville, NY was a station on the Underground Railroad that secretly conducted escaped slaves to safety in Canada. This work was dangerous and illegal under the terms of the Fugitive Slave Act of 1850, but the family continued its efforts for years.

Mrs. Gage was an active figure in the woman’s rights movement and other social causes throughout her life. She was coauthor, with Elizabeth Cady Stanton and Susan B. Anthony, of the three-volume History of Woman Suffrage, and was one of the prominent early members of the National Woman Suffrage Association[1]

Matilda Gage joined the Society when she was living in Fayetteville, New York. Her application and admission to the Rochester Theosophical Society are dated March 26, 1885. She was recommended by Josephine W. Cables and E. M. Sasseville.[2][3] Dr. John Algeo wrote:

She was one of the three leaders in the nineteenth-century struggle for women’s rights and especially an effort to gain the voting franchise. She was a passionately devoted Theosophist, in character not unlike H. P. Blavatsky, especially in her scorn for organized religion, although her political activism was all her own. Having rejected conventional faith and the churches that espouse it, Matilda discovered a kindred soul in H. P. Blavatsky and proceeded to share the discovery with her children and grandchildren.[4]

Gage said her association to Theosophy had been the "crown blessing" of her life and introduced her daughter Maud and his husband L. Frank Baum (the author of The Wonderful Wizard of Oz) to the Theosophical Society.

In addition to the three-volume History of Woman Suffrage, coauthored by Elizabeth Cady Stanton and Susan B. Anthony, Gage wrote several other books. She edited The National Citizan and Ballot Box from May 1878 to October 1881, and also The Liberal Thinker, and wrote many essays published in those journals. A few of her published works:

The term "the Matilda Effect" was proposed by Margaret W. Rossiter, an historian of science, to indicate situations when woman scientists receive inadequate credit for their scientific work and discoveries.[5]